These days we are encouraged to buy products made from plastics materials by assurances of the sustainable resources from which they are made. Consumers are increasingly made aware that plastics derived from oil are not always the most environmentally friendly and that there are other options. Bio plastics made using sustainable resources such as bamboo fibres, algae, coffee grounds, pine fibre and polylactic acid (PLA) from corn starch and sugar cane, for example, are very much in vogue, but the concept is nothing new.

It has been done before, and it feels sometimes that the production of mouldable plastics materials has come full circle.  Materials such as cellulose nitrate and cellulose acetate (cellulose being the main constituent of plant cell walls and of vegetable fibres such as cotton) were amongst the earliest semi-synthetic plastics, but in 1856 Francis Charles Lepage patented ‘A new composition of materials that may be employed as a substitute for wood, leather, bone, metal and other hard or plastic substances’.  This material was Bois Durci.

It was made by mixing fine, sieved sawdust of selected tree species with 15 or 20%, by weight of liquid blood, probably acquired from the slaughterhouses of Paris where Lepage lived. A colouring was sometimes added to achieve the desired appearance.   The concoction was mixed and heated and the resulting paste was dried and reduced to a powder. The powder was then poured into metal moulds and subjected to pressure and heat until it bound together and took on a density which could be forced into the fine detail of the mould. After half an hour of heat and pressure, the mould was removed and the resulting object plunged into cold water. It was a particularly dense material and could be worked on a lathe or sawn, like hard wood, and could be polished.  Its strength and resilience relied on the albumen in the blood combining with the sawdust.

Unsuccessful in his attempts to manufacture items to a good standard, Lepage sold his patent in 1859 to entrepreneur Alfred Latry.  Latry established the Societé du Bois Durci and after initial difficulties, Latry began to make and sell a wide range of small decorative objects, such as ink well stands, desk sets, combs, pipe stems and portrait plaques. He exhibited his goods at the World Exhibition in London in 1862 and at the Paris Exposition in 1867.

By the end of the 19th century Latry’s Societé du Bois Durci had been taken over by MIOM – La Manufacture d’Isolants et Objects Moulés. They continued to make Bois Durci until about 1920, with a somewhat altered recipe, but by that time the material had been superseded by materials such as bakelite, the first entirely synthetic plastic. 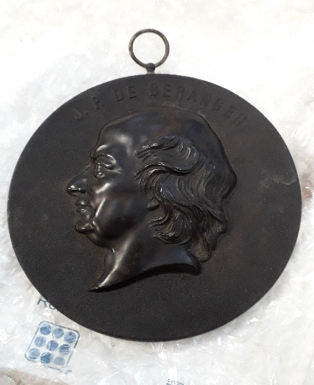 MoDiP has recently acquired a small portrait plaque (see above image) made from Bois Durci and has one other object, an ink well stand, in its collection:

We will undoubtedly be on the look out for other objects made from this unconventional early plastic.

Email ThisBlogThis!Share to TwitterShare to FacebookShare to Pinterest
Labels: history of plastics, Materials identification, Plastics and industry, plastics and the environment