AUB Extended Diploma Students were asked to contribute to our MoDiP’s exhibition Beastly designs. Their work demonstrates a variety of ways in which the MoDiP collection can inspire students with different interests. The project provides a means of exploring principles of design methodology, especially the communication of ideas and concepts through 2D and 3D skills, and of gaining understanding of professional practice, especially of health and safety requirements, of copyright issues, and of working to production deadlines.

This project can also be viewed on our website alongside other ways students have engaged with the collection. 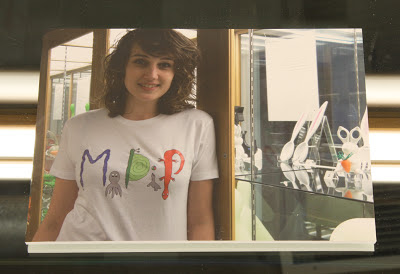 We were asked to design an image or object to go into MoDiP for the ‘Beastly Design’ exhibition. We specialize in photography and graphics so we started to look into logos and typography. We came up with the idea of combining type and animals to create a new logo for the Museum of Design in Plastics. Once we had designed the logo, we considered other marketing ideas and decided to print a t-shirt and a poster as well as develop a web page. 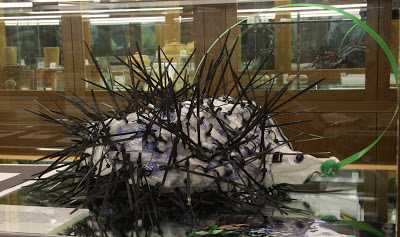 We were interested in the idea of creating a recycled bag in the shape of an animal to communicate the message that recycling plastics helps to prevent animals from being harmed. We decided to look at the characteristics of a hedgehog, focussing on how they curl up when threatened. This piece is a visual way of showing how animals are increasingly being killed as a result of littering. 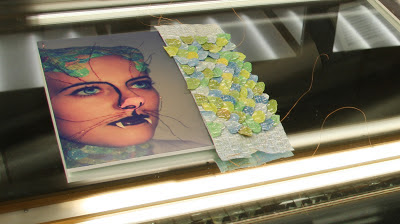 We created a textile themed pieces concentrating on Chinese zodiac animals, which incorporated both of our specialisms of textiles and make-up. We were inspired by the vast array of animals represented.

We used a wide variety of techniques to get the best possible outcome including experiments using various different types of make-up and textile material. For our final piece we have combined the image of animals with people to show the evolutionary process of humans and animals. 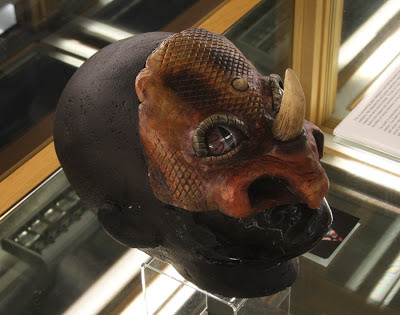 This is a promotional piece designed to promote the Beastly Designs exhibition. The mask is constructed completely from various non-biodegradable plastics. Our intention was to attract the audience’s attention. We created a fictional animal based on adaptations from a gecko and a rhinoceros. This brings to life, in a new and innovative way, the evolutionary process and attempts to remove potential bias in the audience, as they will not know about this creature. It is made to look realistic so that the audience gets a sense of a living, breathing being, which, without the appropriate management of non-biodegradable plastics and derived products, will result in extinction. 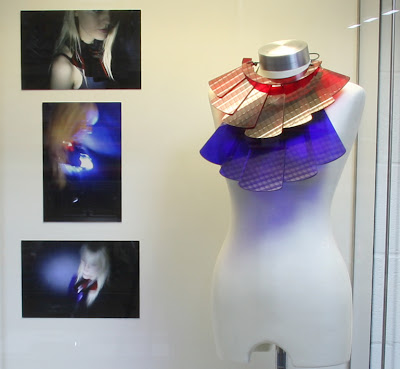 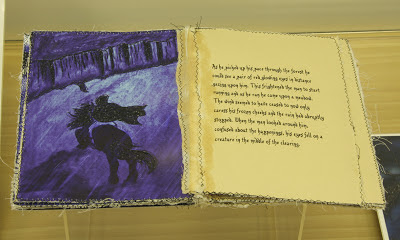 We were first inspired by the word ‘Beastly’ and wanted to look at the negative connotations. We made our final outcome uses illustration and stitch collaboratively to create a hand-made picture book bringing texture to the picture and setting a dark and grim look to the project by using dark purples and blacks. When we look at our final piece we don’t just see a book, we see the careful planning and hard work from two people combining their skills. Looking back on our final piece we feel a great sense of achievement in that we were able to work together collaboratively to create an effective outcome. 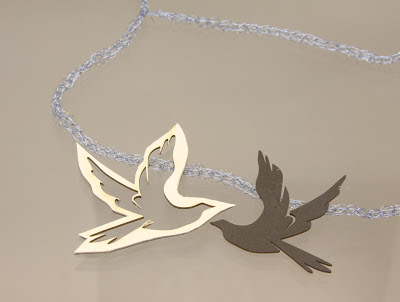 This jewellery piece consists of a French knitted chain of enamelled wire and laser cut and hand cut bird pendants made from mount board. The colour of the wire represents the colour of the sky and the use of black and white mount board represents the contrast of light and shadow when the birds’ feathers hit the sunlight in a photograph. Our aim was to create a beautiful but almost vulnerable piece to capture a bird’s essence whilst in flight. 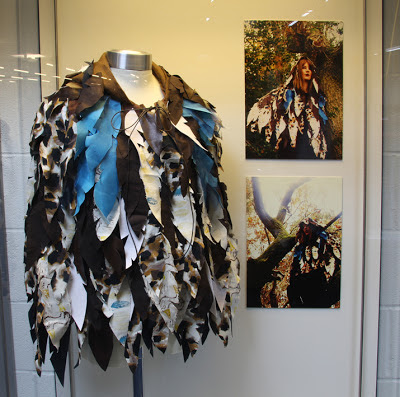 Our inspiration for this piece has come from ducks, more specifically the Laysan duck. We wanted to promote and raise awareness of this endangered bird. We wanted to use the bird as the basis for the design of this wearable piece. Some feathers have been silk screen printed, and lino printing has been used to create the pattern on the fabric. We used computer editing software to give our photos the best look possible. 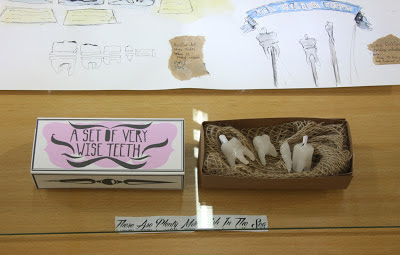 Wisdom teeth are the final set of teeth to appear in humans aged 17 to 25. Wisdom teeth are a set of four molars appearing in the back of the jaw line which can cause problems and are often removed. While focusing on the idea of teeth we discussed many ideas between one another and we liked the thought of wisdom teeth but failed to see how they were wise. We liked the idea of having a cookie jar or fortune cookie style tooth which can be broken or opened or drilled into to reveal wisdom. 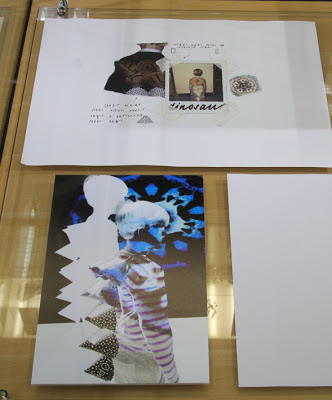 Both being photographers, we decided to collaborate to form a photographic piece for MoDiP’s exhibition theme ‘Beastly Designs’. Our main inspiration for this project was Mary Katrantzou and Erik Madigan Heck who created some stunning fashion photographs with patterned backgrounds and our aim was to try to create something that people would take a second look at; something that not everyone would understand at first but which was very piercing at the same time.

Daisy focuses more on macro photography and played her part in this piece by creating the pattern projected onto the model. She created this by taking macro photos of different parts of animals such as wings, claws and teeth, and edited them into bold, colourful patterns. Cloe’s role was to make costumes for children from recycled plastic materials, such as plastic bags and bottle tops, representing different animals.
With many thanks to Percy Smith and Suri Chapman.


Our problem with litter and the disposal of waste is a common problem, although partly acknowledged, we feel its effects are often disregarded. Such effects are irreversible damage to the environment and the death of many wild animals. We wanted to portray a story from an animal’s point of view and how our everyday carelessness affects them and their environment.
We wanted to use colourful props to attract the viewers’ attention, although we kept one thing to mind, and that was making sure the props were 100% eco-friendly. All the props we used were biodegradable in case any did fly away and become irretrievable. We felt focusing on matters like this were important, especially due to the meaning we wanted behind our film.

When we look at our final piece, we see the affects man has on nature. Although, we also see art, just like a pen to paper or paintbrush to canvas, we expressed everything we wanted through the art of film.


MoDiP would like to thank all the students who took part in this project including those whose work does not feature in the exhibition.

Louise Dennis (Assistant Curator)
Posted by MoDiP at 08:42 No comments: 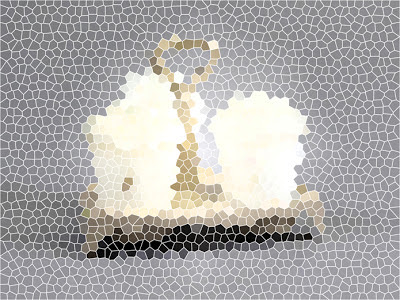 Post your answer in the comments below or find out more about the object by looking at the MoDiP catalogue.

When the MoDiP collection is used for a specific project at the Arts University we document and publish the outcome on our website wherever possible.  We do this to help inspire others in how they might use the collection with their students.  Perhaps the specific project is not relevant to your studies but the way the collection was used might be, so do have a look and think about how we might be able to help you in your teaching.

The case studies we have on the website show work by students studying Fine Art, Fashion Design and Technology, Illustration, Interior Architecture and Design, Visual Communication, Extended Diploma, Textiles, and Modelmaking.   Many of these projects have involved an introductory session by the MoDiP team, or the teaching staff from the specific courses have booked out groups of objects to use in their studio spaces.


To talk to a member of the MoDiP team about using the collection and how we might help you, contact us by email or phone (see the contact details on the right).

Louise Dennis (Assistant Curator)
Posted by MoDiP at 10:55 No comments:

Email ThisBlogThis!Share to TwitterShare to FacebookShare to Pinterest
Labels: Did you know?, MoDiP, Using the collection


Little did I think that Christmas in Thailand would result in one of my most thrilling plastics encounters. It was as a result of meeting Po, a young philanthropist running a community art gallery in Chiang Mai, who had in his twenties (not so long ago) been the youngest ever plant manager at Bayer Polymers.

Never before have I come across such enthusiasm for the material. As we sat in the warmth of the night around a bar on the balcony of my host's beautiful house, he regaled the assembled company with all that is important and exciting about plastics, captivating them with such phrases as:


Plastic is a progression of nature.
Plastics is a transformative technology.
Polyester holds our memories.
What is life without acrylic paint?
Boil your bones and you have cellulose.
Can you honestly believe that a spider's web is not woven in plastic?

He then disappeared, borrowing someone's motorbike to go and close up his gallery. He took much longer than expected and we were concerned for him and the bike when he returned, flushed with success, and brandishing the carrier bag shown at the top of this image. 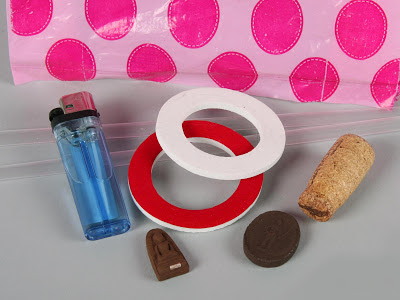 He had been out foraging for significant pieces of plastic and collected a cork, cigarette lighter, two straws, some unusual washers and two Buddha relics. He encouraged us to feel their different textures, some hard, some soft, and wondered at their range of roles from the everyday to the symbolic. It was wonderful how enthralled everyone was.

Let's hope that there are more such inspiring encounters in the year ahead.

Susan Lambert, Head of MoDiP﻿
Posted by MoDiP at 14:59 No comments: