I have just catalogued this K-Tel Burger Matic, which was kindly donated to MoDiP by a friend of mine.

It works by making up to 8 burgers quickly and easily: a reusable polyethylene (HDPE) plastic disc is placed in the acrylic (PMMA) tube, followed by the burger mixture with another disc put in on top of that. The plunger is then inserted to press the food into a uniform burger shape before the whole process is repeated, stacking one burger on top of another. Advertised as being convenient and easy to clean with ‘no more mess’ and ‘no more fuss’, it dates to 1976.

Released as the Patti-Chef in 1960s America, the invention came to the UK a decade later as the Burger Matic at a time when pre-processed foods were not as widely available as they are today. It cost £1.99 from high street stores like Woolworths and the Co-op and possessed the magical marketing slogan on its box: ‘As advertised on TV’.

K-Tel was founded by Philip Kives (1929 – 2016), a Canadian door-to-door salesman and department store product demonstrator. In 1962 he invested his own money in purchasing some teflon-coated frying pans and paid for an accompanying television advertisement that he wrote and directed himself. With his fast-talking patter and marketing skills, the infomercial was an immediate success and Kives went on to establish his company K-Tel (the ‘K’ stood for Kives, the ‘Tel’ being an abbreviation of television), and acquired more products to sell. Such innovations included the Miracle Brush (over 28 million had been sold by the late 1960s), the Veg-O-Matic (invented by Samuel J. Popeil in 1960) and the Patti-Chef/Burger Matic.

In 1965, K-Tel Records was launched selling compilation albums from all musical genres. Whilst this may sound dated now, it was a way in which people could discover new songs and listen to their favourite tracks without having to acquire all of the pop chart singles separately or purchase individual artist’s albums. Even Dave Grohl recently paid homage to the K-Tel ‘Block Buster’ LP which was the first record he had ever owned and at MoDiP we have the 1976 ‘Disco Rocket’ album in the collection, including classics like Donna Summer’s ‘Love to Love You Baby’.

By 1981 K-Tel’s sales had reached a peak at $178 million but a series of bad business investments followed, resulting in bankruptcy and many years of legal battles for Kives to get his company back. He did and it is still operating today although Philip Kives sadly died in 2016 at the age of 87. In its day, K-Tel sold a huge variety of household wares designed to save time, space and trouble, the majority involving the plastics material in some way. The adverts have been widely referenced in US popular culture, being parodied in comedy performances for television programmes like Saturday Night Live and The Simpsons, as well as in several films. Kives was at the forefront of direct marketing television, coining the catchphrases, ‘As seen on TV’ and ‘But wait, there’s more!’ now so widely familiar to us all.

Florence Compound was the invention of Alfred Critchlow (1813-1881) who was a manufacturer of horn buttons in Birmingham, England. After emigrating to the US, where he initially continued in this trade, Critchlow eventually moved to Florence, Massachusetts, where, in the 1850s, he began to experiment with moulding compounds of shellac (a resin secreted by the lac beetle) and gutta percha (a natural material derived from the Malaysian tree of the same name). He developed a shellac-based moulding material which he named Florence Compound and used it to manufacture buttons and Union Cases (small protective cases for daguerreotype photographs), thought to be some of the first mass-produced plastic mouldings. In 1853 Critchlow went into partnership with Samuel Hill and Isaac Parsons, but when the development of new photographic processes led to a dwindling in demand for such cases, he sold his share in the company which then took the name Littlefield, Parsons and Co. Subsequently they changed their name to the Florence Manufacturing Co. and, needing to find new uses for their moulding material, produced highly decorated hand mirrors and brush sets. 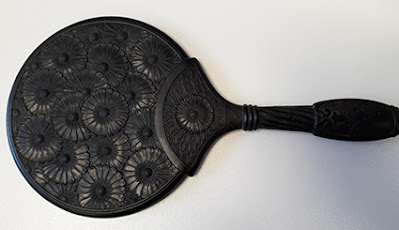 One such mirror has recently been acquired by MoDiP. The back of the mirror is decorated with a Japanese chrysanthemum design 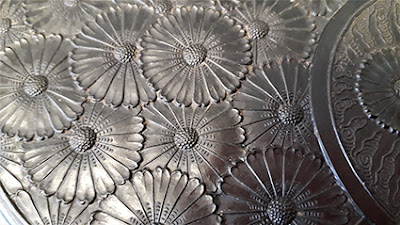 and the word ‘Florence’ is clearly seen moulded on the handle. 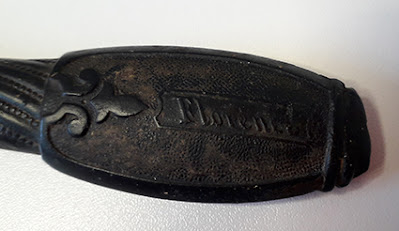 The mouldings are still crisp and sharp and, apart from a little damage to the handle, it doesn’t look as if it is over 130 years old.

The ability of shellac to be moulded into intricate patterns is also demonstrated by this Union case which is part of the Plastics Historical Society Collection and held at MoDiP. Manufactured by S. (Samuel) Peck & Co. it is thought to have been made in the 1850s.

Another recent acquisition for MoDiP is a very pretty shellac trinket box. It has a moulded lid depicting two nesting birds. As yet we haven’t conducted any research to establish its manufacturer. It has no identifying marks, but hopefully, with time, we might find information about it. 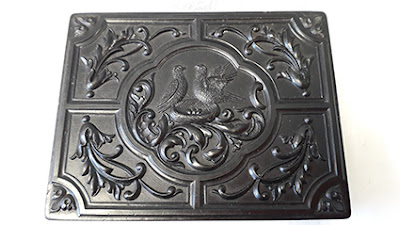 Following on from my recent blog post about Arne Jacobsen’s alarm clock, this week I am focusing on another object from MoDiP’s collections designed by him: the Cylinda-Line coffee pot from Danish tableware manufacturer Stelton. This sleek, stainless-steel range has contrasting, decorative phenol formaldehyde handles, aptly demonstrating this material’s heat resistance properties. 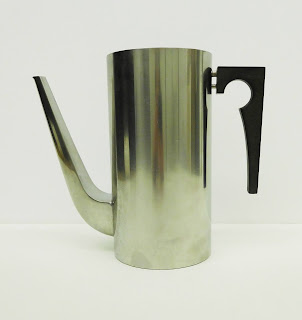 Jacobsen’s stepson, Peter Holmblad, was employed as the Export Manager for Stelton in 1963. He wanted to modernise the company and as part of this, he tried to capture the interest of his stepfather in helping him design a new product line. Without success, he attempted his own design of a lidded bowl which Jacobsen could not resist in perfecting. Together they went on to develop the Cylinda-Line range of simple, hollow cylindrical forms: the iconic shape and name being attributed to Holmblad, whilst the styling was Jacobsen.

Beginning with a drawing on a napkin at a family dinner, once the design had been approved, prototype models were made out of wood and the Stelton production team then collaborated with Danish Steel for manufacture. Three years of intensive development followed as the original idea of using steel tubes and then welding on the base proved too expensive for mass production. New techniques and machinery had to be invented and the design modified to what was actually possible to recreate (note the different handle in the two drawings above).

Unlike anything else seen on the market at the time of launch in 1967, at first the cocktail and tableware collection did not sell well: Holmblad recalls asking his mother and sister to order items in order to boost sales. However, later that year Cylinda-Line was awarded the Danish Society of Industrial Design ID prize and the following year the International Design Award by the American Institute of Interior Designers. By 1970, Stelton had had to expand to meet with international demand and the range is still available to buy today, now widely considered a design classic.

MoDiP’s latest pop-up exhibition is entitled ‘Women in plastics’, taking its name from the professional initiative that recognises achievement, encourages development and supports diversity and equality across the industry. The exhibition is an opportunity for the museum to celebrate some of the women who have and still do use plastics in their work.

Here are some of my favourites.

Belle Kogan (1902 – 2000) is credited as being one of the first prominent female industrial designers in the US and also one of the first in her profession to design with plastics. In 1934 she designed the Smug electric alarm clock, model no. 8F01, seen in the image above. It is almost identical to the more recognised Quacker alarm clock, model 7F63.

Kogan designed this pelican/duck shaped novelty clock for Henry Warren who founded Telechron in 1912. He built a self-starting synchronous motor for his company's range of electric clocks and employed notable designers to produce the cases that were then made affordable to all through mass production. The yellow Smug with orange beak featured in the Telechron catalogues between 1935-1939 and is compression moulded in Plaskon (trade name), a urea-based plastics material with a cellulose filler, that could easily take colour.

Libuše Niklová (1934 – 1981), a globally renowned Czech toy designer, readily exploited new plastics materials and manufacturing technologies. In 1963, she introduced the first of her accordion toys (refer image above), made of blow moulded polyethylene with a whistle incorporated into the body so that it would emit a noise when stretched.

Niklová believed that children should not be static observers when playing and so designed toys that would engage with all of the senses, offering tactile, olfactory, optical and acoustic development. This is particularly evident in one of her most notable inventions, the PVC inflatable toy seat (see image above). Deliberately designed in a move away from children’s furniture being simply a scaled down version of the adult model, the toy was intended to be sat on and bounced around the room. The Buffalo was designed in 1971, joined in 1976 by a calf (MoDiP’s example).

Inspired by a de-constructed Union Jack, Stella McCartney acted as the creative director in collaboration with Adidas to design a 590-piece collection for the Team GB 2012 Olympics. This was the first time a leading fashion designer had been involved in the creation of sportswear for the Olympic and Paralympic Games and McCartney continued her role for Rio 2016. The women’s swimsuit on display is one of five pieces from the accompanying fan wear range held by MoDiP and incorporates 80% recycled nylon (polyamide).

Spanish-born, Milan-based, Patricia Urquiola established her own studio in 2001 and is both an architect and designer. She has worked with a broad range of manufacturers and materials throughout her career and this Jelly plate, a 2013 design for Kartell, is a beautiful example of her experimentation with plastics. Batch dyed in acrylic (polymethyl methacrylate, PMMA), the texturisation of the surface creates the appearance of jelly and it was the piece that inspired one of MoDiP’s Student Creatives who recreated the shapes within a garment to represent the feel and movement of the plate.

Bathsheba Grossman is an American artist who creates sculptures using computer-aided design and three-dimensional modelling. 3d printing technology is her main medium, working predominantly with metal and glass, although she occasionally experiments with plastics. This small table light entitled Quin, was designed in 2005 for MGX by Materialise. It is based on the twelve sided dodecahedron and is created as a single object, without joints or seams, in sintered nylon (polyamide, PA).

Women in plastics is currently on display at the Museum of Design in Plastics (MoDiP), on the first floor of the AUB Library.