My name is Vanessa Pearson, and I graduated from my degree in Modelmaking at AUB this summer. I spent my final year working on a few interesting projects, one of which was a facial reconstruction of an Ancient Egyptian mummy for the Bournemouth Natural Science Society (BNSS). Although the final reconstruction was cast in silicone for a realistic skin appearance on display, 3D printing played a hugely important role in the production of the piece.

The key reason why 3D printing was vital in the facial reconstruction process of this particular mummy, is that it allowed her face to be revealed while she remains wrapped in her sarcophagus. When a facial reconstruction is carried out without 3D printing, a skull must be moulded and cast in plaster in order to have the facial muscles built up onto the copy in wax or clay. Although the mould is taken in such a way to avoid damage to the specimen, it does put the original skull at risk, and requires specimens such as mummies to be unwrapped. Tahemaa, the mummy at the BNSS, was CT scanned in 2009 without ever having to be unwrapped, and this scan allowed me to produce a 3D print of her skull to use for facial reconstruction instead of a cast. The scan in 2009 showed more detail than a previous scan done in 1993, and revealed the mummy to have been in the age group of mid 40s - 50s, rather than in her 20s-30s, as she was previously thought to have been when her face was first reconstructed in 1996. I was able to convert the new scan files into 3D printable files and produce a replica of her skull in PLA plastic, and another in nylon.

I used the cheaper, PLA copy to produce a new, up-to-date reconstruction of the face of the ancient ‘Lady of the House’ at her correct age by building up facial muscles in a wax clay in the same way one would on a plaster skull, using the Manchester Method of facial reconstruction. The dearer, nylon skull was not built upon and is now on display at the museum in Bournemouth, where it is tough and durable enough to be handled by visitors - showing all the minute details visible on the scans in a relatable 3D context.
The benefit of being able to 3D print the skull at different price points with different properties is the flexibility of being able to print the same specimen in different ways for different purposes, which you wouldn’t have by just moulding and casting the original specimen in plaster. I could use an Ultimaker 2+ to save money printing the copy of the skull that would get destroyed in the moulding and casting process (which transferred the final model into the skin-like silicone), and spend more of the project budget printing the skull that would be on permanent display in the museum with an SLS 3D printer in nylon, which produced a more life-like looking object with more durable properties.
I think that using a 3D printed skull for the reconstruction process also has other advantages than solely protecting the original artefact. For one, the specimen can be reproduced countless times from a set of files that the museum has ownership and control over, which is invaluable for replacing or reproducing the museum’s interactive copy of the skull. However, I also think it can also help make it easier for the person doing the reconstruction to make the result more accurate. The process of reconstruction involves placing 32 markers on different parts of the skull to simulate the average depth of tissue at those points, which act as a guide when rebuilding the facial muscles.
These depths are guided by the ethnicity, gender, age and weight of the individual in question. On a plaster cast skull, a hole is drilled at each point and a wooden peg is inserted at the right depth. Using a plastic skull, I was able to cut plastic rods to the exact right length needed and attach them with plastic glue, removing the margin for error in calculating the depth of the hole and the extra length needed on a wooden rod to fit into the hole, which is important when working to points of a millimetre.
Although it is becoming more and more common for facial reconstructions to be done digitally, 3D printing is still an invaluable resource for bringing the resulting work - or even different stages of it - into the real world. I think that this process of scanning and reproducing artefacts either as 3D digital models or 3D printed replicas is also invaluable for cataloguing and displaying all kinds of artefacts - not just skulls for facial reconstruction - in a more accessible way, and I look forward to seeing it hopefully used more and more prevalently in the museum environment.

See the facial reconstruction of Tahemaa and a 3D print of her skull on permanent display at the Bournemouth Natural Science Society today.
Vanessa Pearson.
Posted by MoDiP at 10:00 No comments:

Unwanted electrical equipment is the world’s fastest growing type of waste, commonly referred to as e-waste. Of the 30 million tonnes being disposed of each year globally, 15,000 tonnes is attributed specifically to headphones. Technological advances result in many pairs reaching the end of their useful life after only a short period of time and if minor breakages occur they are often difficult or uneconomical to repair. As they are comprised of a number of different materials, headphones also present a complex recycling challenge.

With this in mind, Gerrard Street founders Dorus Galama and Tom Leenders have produced a modular headphone with parts that can be easily replaced and upgraded. Offered through a subscription service, the headphones are designed to be sent through the post for easy assembly at home. As individual parts get worn or broken, customers can return the obsolete components for replacement, free of charge, with 85% of this e-waste being either reused or recycled.
This circular design model provides customers with a high quality, affordable headphone service (subscription starts from €7.5 each month) whilst allowing the company to maintain full control over production materials because it retains ownership of the product. It also provides the incentive for Gerrard Street to produce the most durable headphones it can in order to maximise income through extending use cycles. Furthermore, any headphones returned to the company are refurbished, with 1,500 pairs to date being saved from the bin.


You can see these headphones and other objects that have been designed with sustainability in mind in MoDiP’s pop-up exhibition: Design to minimise environmental impact, 1st floor, AUB Library.

In May, I visited Lisbon, Portugal for a conference and took the opportunity to do a little plastics spotting whilst I was there.
A nice surprise greeted me on the dressing table of my room, Kartell’s Bourgie lamp designed for Kartell by Ferrucio Lavian is such a statement piece.  MoDiP has a silver version in the collection, but I think the clear one is quite fun. 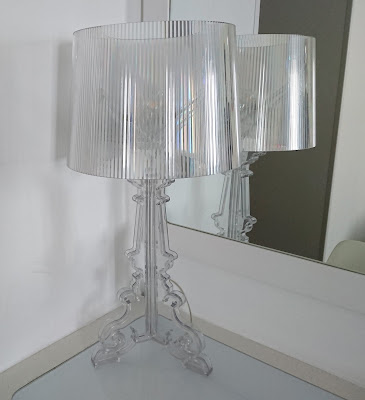 Also in my room was this classic table and chair set including the Tulip chair originally designed by Eero Saarien in the 1950s. 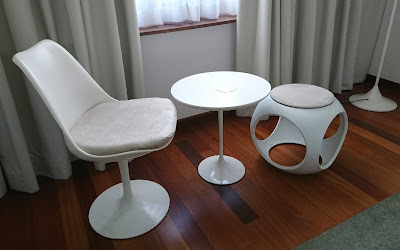 Outside, the hotel had a beautiful modern set of lounge seats in a smoking area in a terrace surrounded by high buildings.  The set, titled Stones, was designed by married couple Stefano Giovannoni and Elisa Gargan for the design company, Vondom.  The smooth, naturalistic shapes really complement the straight lines of the terrace. 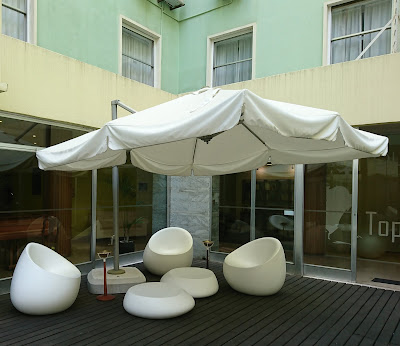 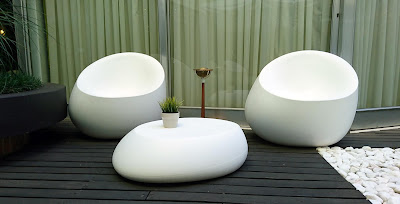 The final hour of my visit, before I had to head off to the airport, was spent in the shade of the neighbouring hotel sitting at an anonymous ‘rattan’ bistro set whilst supping a well-deserved glass of delicious, cold, Portuguese beer. 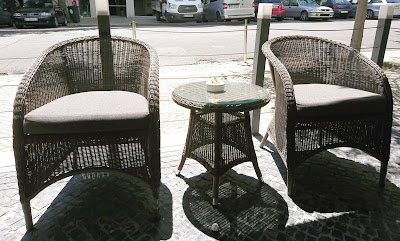 The imitation rattan was so good, complete with texture along the shaft, that I had to have a closer look to be sure it was plastic. 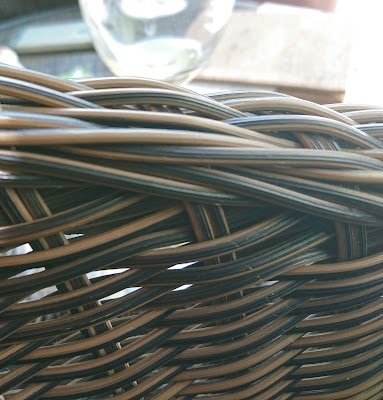 The attention to detail on all of these plastics designs were a delight to see.
Louise Dennis, Curator of MoDiP
Posted by MoDiP at 10:00 No comments:

Our latest pop-up exhibition is on display outside MoDiP on the 1st floor of the AUB Library and accompanies Revolution: environmentally conscious design in plastics. Whilst the latter concentrates on the sustainability of different plastics materials, we thought we would use the pop-up to explore some objects from the collections that have been designed sustainably. The three cases look at alternatives to single-use plastics, innovative packaging and the Bird Headphones and the objects will be on display until 16th September 2019.

Here are some of my favourites:

Black plastic is made by mixing scrap plastic of many different colours and it is fully recyclable, but the optical machinery used to sort plastics in recycling plants have so far been unable to detect the carbon black pigment. As a result, this type of packaging often ends up in either landfill or is sent for incineration. By working with leading recycling expert Nextek and additive/masterbatch specialist Colour Tone, The Collective have been the first food and drink company to develop an alternative black dye that can be ‘seen’ by the near-infrared differentiation used in separating plastics. Their new lids have been in use since October 2018.

Inspired by traditional 19th century Italian baroque silverware, the DeLuxe cutlery set was designed by Fabio Bortalani and Donata Paruccini for Pandora Design of Italy in 2000. Made from an acrylic/polystyrene composite, the four piece set is 100% recyclable but, as it is more robust than typical ‘cheap’ disposable cutlery and is dishwasher proof, reuse is encouraged. They are a good example to demonstrate that plastics materials should be valued not discarded.

The Sustain-It bottle is part of an innovative new system being trialled in the UK between Coca-Cola European Partners, Validfill and the University of Reading. The refillable Tritan™ Copolyester bottle contains a microchip that interacts with dispensing technology within a new range of smart Coca-Cola Freestyle machines. Consumers pre-pay for drinks through a mobile app and then scan a code at the machine to access over 100 drinks. In addition to reducing plastic bottle consumption, the scheme generates lower carbon emissions as the drink mixtures can be sent in concentrated form by courier as and when needed.