We all need permission to play sometimes…permission to down tools, permission to stop worrying about deadlines and permission to well, just have a bit of (very sociable) fun. That was partly the idea behind Playtime, but we also saw it as a way of welcoming students into our wonderful museum space - the gateway to the amazing research resource that is MoDiP. 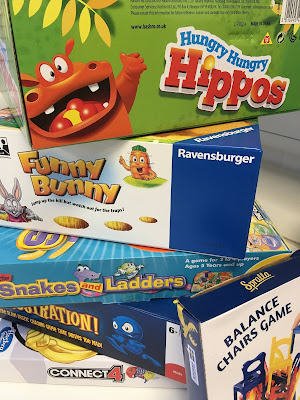 The first session saw students coming in tentatively at first, not quite sure what to expect - but within a few minutes becoming totally absorbed in a strategic game of Connect 4, giggling over a silly game of Funny Bunny or going all out (great for those with a competitive streak) with the fast and furious Hungry Hippos game. And for those with a steady hand, they were even able to defy gravity playing the ‘will they/won’t they’ balancing game comprising of lots of tiny chairs! 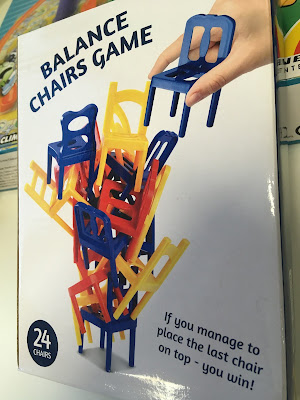 We also got the Lego out, all of it, all over the floor and went back to relive those magic moments as a child, when the possibilities of creating whatever you could dream up was at your fingertips.  It is actually a great way to let your creative juices run free, with no expectation of creating a masterpiece at the end of it. It can be a truly liberating experience – and of course it’s lots of fun, which is really the point.
And STOP PRESS, Playtime will be running each Wednesday lunchtime in MoDiP (12-2pm) from now until Christmas (except for Wednesday 4thDecember).  And talking of Christmas, look out for our Christmas Lego Challenge coming very soon – we want you to create six themed Christmas cameos during December, take selfies and share the festive fun on Instagram (tagging MoDiP of course!) 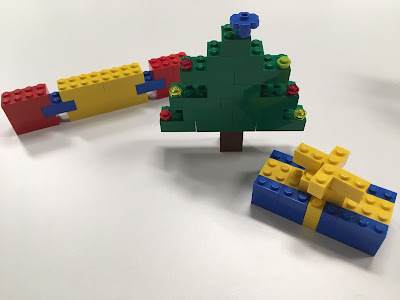 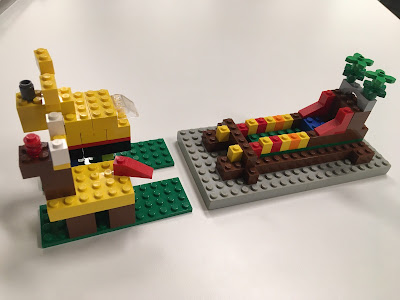 The cinema release of the film Le Mans 66 starring Matt Damon and Christian Bale this week transported me back to June this year when I experienced the historical race for the first time.  The 24hours of Le Mans is a motor race not just of speed but of endurance too.  The fastest car is not guaranteed the win if it is not reliable enough to keep going for the whole 24hours.   There is nothing worse than waking up in the morning to find that the car you were supporting broke down in the early hours.

I went on a ‘girls only’ trip, with an ex colleague from our time working at Birmingham Museum & Art Gallery, which was great fun.  Whilst we were there I did a bit of plastics spotting and some not-plastics spotting.

We arrived on the Wednesday to take in all the support races and qualifying sessions on track, as well as the drivers parade through the streets of Le Mans itself.  We stayed in a campsite right inside the track with the now sadly departed Thomas Cook.  Having travelled by ferry, train, and tram, we were very pleased to not have to carry a tent or bedding as these were all provided as part of the package – the tent was even put up for us.  The nylon tent did a great job keeping us dry as the rain came down over night but did nothing to mask the sound of the cars on track, which actually became quite soothing, or our neighbours snoring, which did not.

Some, but not all, of the cars had bodywork made of carbon-fibre composite which helps to keep the weight as low as possible.  Being lightweight means the cars can run faster and use less fuel but because they are so light they tend to want to take off so they need to have rear wings to help keep them on the ground.  The rear wing works in the opposite way to that of an aeroplane which uses the higher air pressure directed below the wing to lift the plane.  On the car the higher pressure is directed above the wing to push the car down so that it remains in contact with the road surface.

With the cars being lightweight, it is easy to lift them off the track when they crash or break down. For the safety of the volunteer marshals, all the drivers and the other cars, it is vitally important that cars can be removed from the track as quickly and as safely as possible.  The efficiency of the actions of the marshals and safety crew was demonstrated in front of where we were sitting during one of the qualifying races.

Right next to the track, and open all year round, is a fascinating museum full of amazing historical cars and objects relating to key drivers.  One car that caught my eye was the little 1967 British Mini Marcos which has a fibreglass body.  In 2013, I came across a bright yellow Mini Marcos from the 1980s and wrote a blog post about it.

The grandstand seats were made of a plastic material which is probably something like polypropylene although some spectator seats are made of high density polyethylene.  What was interesting is how the seats have degraded outside in the elements and how they are only replaced when they really need to be.

When at a race track full of fuel-guzzling cars it might seem strange to find small environmentally friendly activities, but the quiet way some of the food stalls were moving away from wasteful single-use plastics was commendable. We were charged an extra Euro for souvenir cups which could then be reused (saving you that extra Euro on your next beer).  There were different cups with a range of sizes including pint, half pint, espresso, and champagne.

Where there could have been plastic used to serve food, some stalls used paper plates or trays.  I had a delicious waffle covered in Nutella which could have proved disastrous on this flat card tray, I am so glad I didn’t drop it.

To counter the quiet environmentally-friendly activity, was the shocking number of unnecessary give-aways that were thrown to the crowds during the drivers’ parade.  The streets were scattered with wrist bands, flags, hats, toy figures, keyrings, and frisbees that the people in the crowds called out for but then discarded.

I am not sure what the outfit this poor person had to wear was made of but it was a warm afternoon and they must have been rather hot, I hope it was breathable.

Louise Dennis (Curator of MoDiP)
Posted by MoDiP at 10:00 No comments:

MoDiP has recently added a Hokki stool to the collections, donated by the designer John Harding who graduated from AUB in 1991 having studied HND Industrial Design.

The Hokki has been designed as a flexible, physical learning aid to counter traditional views that educational seating should be rigid, without any form for free movement. With supporting research suggesting that stillness of the body for long periods can actually inhibit concentration, the convex base encourages the body to move in all directions leading to healthier sitting, reduced tension and mental fatigue.
This is John’s story about how he developed the stool. 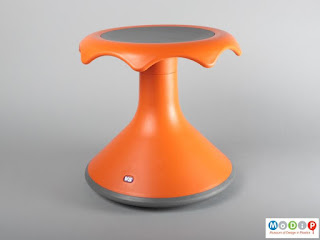 The inspiration for the Hokki began with a cedar wood rocking stool I designed as part of a range of garden furniture, launched in 2003 at the 100% Design exhibition in London. As I became more aware of the ergonomic and cognitive advantages of active seating, I thought about developing a new lightweight, more commercial version of the stool for children and adults alike.

The first step forward from the solid cedar stools was the design of a hollow version made from plywood tube with a removable lid for storage. The next major development was to focus on making this a product for children, so I changed material from wood to polyethylene (PE) plastic, with a non-slip rubber base. Polyethylene’s chemical and structural properties lent themselves to the small volume rotational moulding process used to produce fifty stools for school trials. I took out liability insurance and selected ten different primary schools who ‘tested’ the stool over a period of six months. Having received praise from both children, teachers and parents, I was convinced that this was a genuinely beneficial product but importantly there could be a market for it.

Having approached and pitched unsuccessfully to virtually all of the UK school furniture manufacturers, I paid a marketing director to help me produce a one page “Product CV”. This featured information such as images, a comprehensive description and the financial opportunities the product could offer. I sent it out to a number of European companies recommended to me by the Furniture Industry Research Association (FIRA) and was subsequently contacted by Vereinigte Spezialmobelfabriken (VS), a school and office furniture supplier based in Germany. 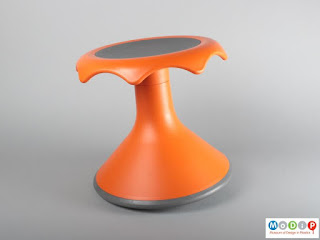 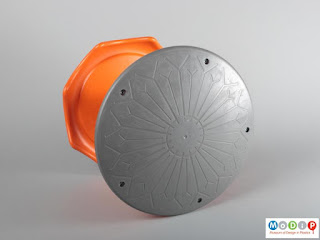 The final design saw the last development from polyethylene to polypropylene, as this material was more suitable for volume injection moulding, with the Hokki being launched in March 2010 by VS in both Germany and America. Whilst it had been through several changes in both materials and shape, the fundamental principle always remained the same: to create a stool that rocked in all directions, promoting better posture and providing health benefits. It's also fun to sit on! 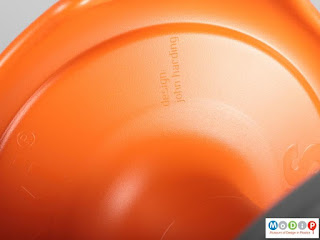 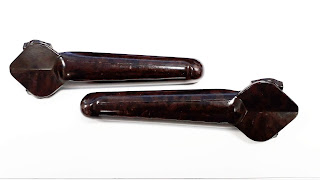 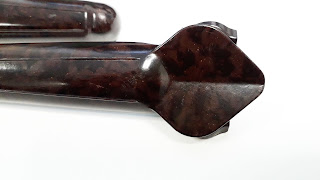 A mundane but practical everyday item in the 1920s when these examples were produced, they are a reminder of my childhood days when the stair carpet in our 1950s family home was held in place by a chromed metal version, similar to these in design. 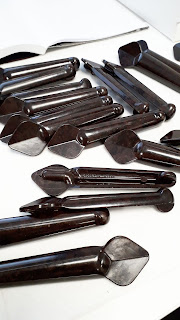 Before the fashion for fully fitted, wall to wall carpeting, stairs were carpeted with a runner which was held in place by stair rods or clips. The practicality of using this system lay in the ability to move the carpet up or down to alleviate the inevitable wear or fading on the ‘nose’ of the carpet – the point at which the carpet turns from the riser to the tread. 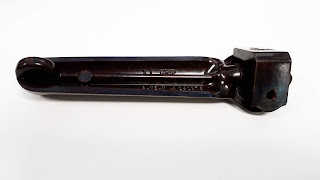 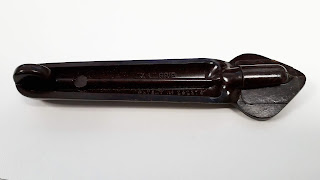 I believe the fashion for stair runners is returning but stair clips or rods are likely to be more of a decorative feature than a practical solution, as carpets are now, more likely than not, to be tacked in place. MoDiP has other examples of bakelite stair clips and a growing range of other domestic fittings made using this ubiquitous material.