We are busy getting ready for the summer here at MoDiP and during August we are offering some fantastic family activities, themed around our current exhibition Revolution.
Activities will allow families to learn about sustainability in plastics, recycling and upcycling.


MoDiP will welcome Eco-plastic Detectives who will engage in an ‘I spy Eco-plastic’ activity, requiring children to put on their detective hats. They will explore and find certain objects within the display cases of the exhibition ‘Revolution’. This activity is a drop-in session taking place throughout August with a self-led worksheet. If you are interested in coming along, please check out our opening times on our website before making your journey.

There will also be an activity to investigate plastic packaging seeing families members become an Eco-plastic Investigator. Using a magnifying glass children will explore objects to find the recycling triangle. They will write down the number and letters they see in or near the recycling triangle. Then with the help of an Identification Code List they can find out what the number and letters mean. This session requires booking a ticket via Eventbrite. There are various sessions throughout August.

We also have an activity that will allow families to become Eco-plastic Makers. Why not come along and put into practice your skills of upcycling by making a woven bag from used plastic bags. There are a limited number of places for this activity so please ensure you book a ticket, via Eventbrite

Please note that all children must be accompanied by a responsible adult at all times.
If you require more information about any of the family activities above please call 01202 363727 or e-mail modip@aub.ac.uk.

We look forward to seeing detectives, investigators and makers coming to visit us soon!

Plasticidade – A history of plastics in Portugal

As part of the Plastics Heritage Congress which I attended at the end of May, I got to visit the Museum de Leiria - a beautiful museum in the old building of the Convento de Santo Agostinho.  Plasticidade is a play on the word plasticity eg. Plasti-City to show the link the city of Leiria has with the plastics industry. 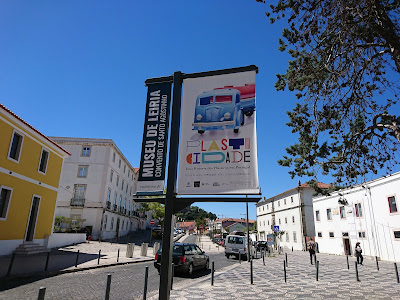 The exhibition resulted from a partnership between the Municipality of Leiria and the research project ‘The Triumph of Bakelite – Contributions for a History of Plastics in Portugal’, developed at the Interuniversity Centre for the History of Science and Technology – Faculty of Sciences of the University of Lisbon and funded by the Foundation for Science and Technology – FCT.
The exhibition looked at the production of the plastics as well as the objects it has become.  One of the objects on display that really piqued my interest, was a hand-operated injection moulding machine from 1947. 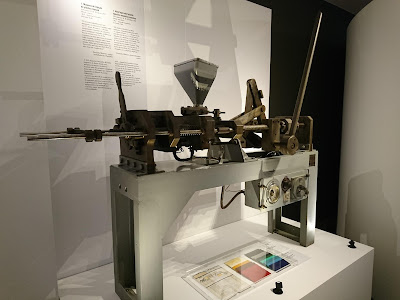 After the display about the production of plastics objects, the exhibition was organised by decade, starting with the 1930s, and displayed the types of objects that were typical from each era. 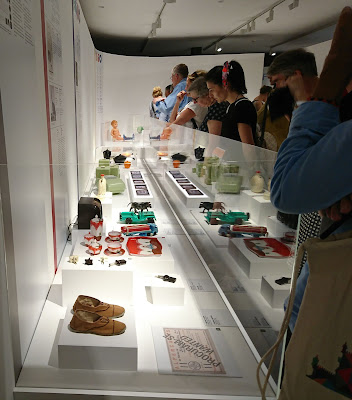 I was particularly intrigued by the bread bin on the left of the image below from the 1950s / 1960s, as it was very reminiscent of a container we have in the MoDiP collection. 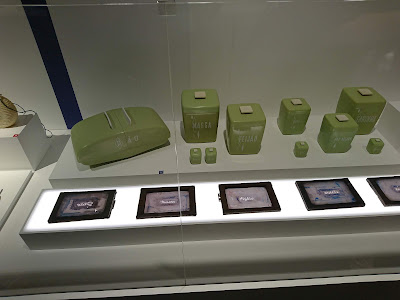 Despite being a celebration of plastics and the resultant objects, the exhibition did not shy away from the problems that plastics can cause to the environment when they are not disposed of correctly.  The use of plastic particles in a container of sand was very clever, as was the map showing the currents of the seas. 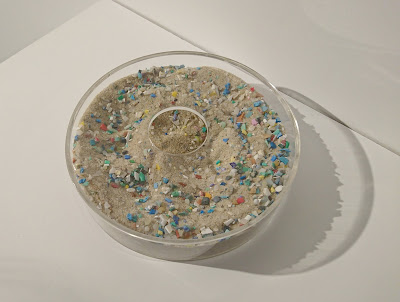 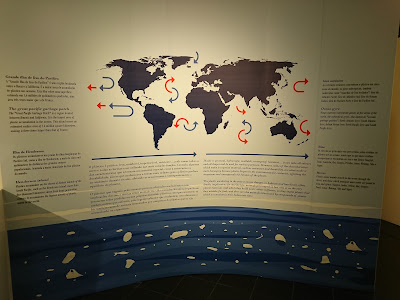 The exhibition came to a close with a thought about the future use of plastics and an image of the Jiggs pBone from the MoDiP collection. 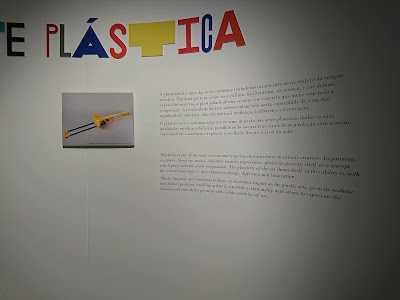 It is great to see how other museums are engaging with plastics.  It was particularly nice to see a celebration of the material family, especially as it is in such a fabulous location.
A fellow delegate did remark that this exhibition was the second they had visited in an ex nunnery / convent building in a matter of weeks – the other being the Bow Arts Raw Materials exhibition at the Nunnery Gallery.
Both exhibitions are definitely worth a visit.
Louise Dennis, Curator of MoDiP
Posted by MoDiP at 10:00 No comments:

At the end of May the Plastics Heritage Congress, a three-day international conference, was held at the Museu Nacionale dos Coches, Lisbon, Portugal.  The theme of the conference was History, Limits and Possibilities and attracted delegates from all over the world, including the USA, Australia, Africa, and all over Europe. 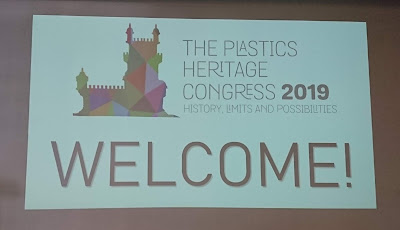 The keynote lecture by Jeffrey Meikle was particularly interesting to me as his book American Plastic: A Cultural History plays a vital role in my PhD research.
All of the three days were split into two streams and it was difficult to choose between which talks to attend because they all sounded fascinating.
On the Wednesday, I chaired a session entitled Museums, Collections and Archives and introduced papers presented by Cancy Chu, University of Melbourne, on the Impact of plastics on archives; Vitězslav Knotek, University of Chemistry and Technology in Prague, on the Identification and degradation of cinematographic films with magnetic audio track; and Masahiko Tsukada, Tokyo University of the Arts, on the Material analysis of animation cels produced in early 1990s before the digital era.  All of which looked at the analysis of the materials used and considered how they might be stored.
On the Thursday, the papers were focused on conservation and cleaning techniques and concluded with a coach trip to a museum in Leiria in central Portugal to view an exhibition about plastics.  I will write another blog post all about the exhibition and the objects included.
On the last day, I presented a paper entitled Making Connections: the development of relationships between museum visitors and objects of historic polymeric materials which was received favourably.  In addition, alongside Katherine Curran, Suzan de Groot, Ruth Keller, Maria Joao Melo, and Geoffrey Mitchell, academics from across Europe, I judged the poster entries and awarded the prizes.
One of the speakers on the Friday was Mariele Neudecker, talking about her MoDiP project Plastic Vanitas. 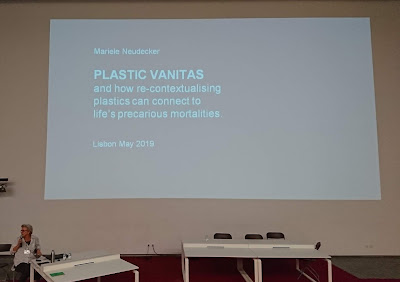 It was nice to see the image below on one of Mariele’s slides showing my colleagues, Pam Langdown and Katherine Pell, alongside two students who worked with Mariele on her project.  The student on the left side of the image, Leo Gauvain, sadly lost his life when he returned to Bangkok after completing his degree in photography at the AUB.  The team at MoDiP were very sorry to hear about this tragedy. 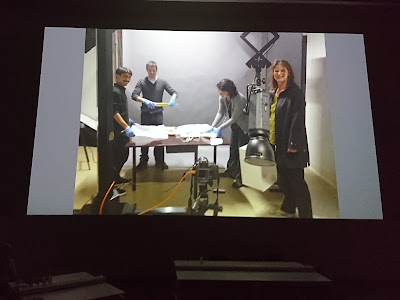 Through-out the three days, I learnt a lot about all kinds of plastics materials, from Gutta Percha, a material derived from tree sap, to Carbolite, a Russian version of the more commonly known Bakelite, and met some great people working on some amazing projects.
Louise Dennis, Curator of MoDiP
Posted by MoDiP at 10:00 1 comment:

Newly acquired by MoDiP as part of the Plastics Historical Collection, is this lovely spice box or masala dabba. 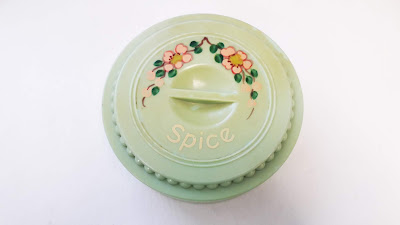 A masala dabba is used for the short-term storage of the most commonly used spices in Indian cuisine. These containers enable the cook to have their favourite spices to hand without having to open jars, and enables easy and quick blending of the chosen spices. This example is made from compression moulded urea formaldehyde and has a registered design number on the base suggesting that it dates from circa 1949. These spice pots are often made from metal or wood, but this example is from an era when new uses were sought for plastics materials. It is made in a familiar green colour, typical of its time, and hand decorated with a floral design. 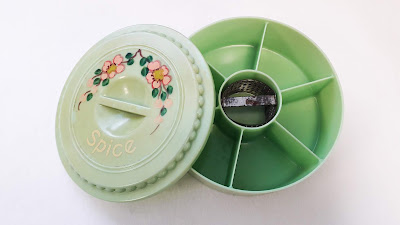 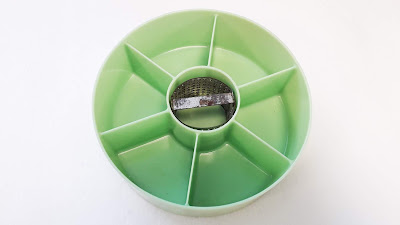 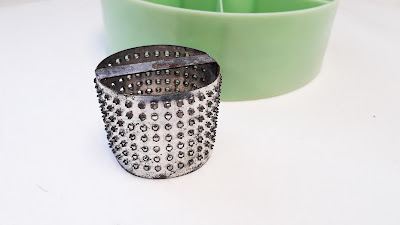 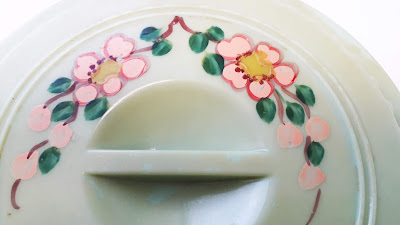 If you would like to see this particular object, other objects from the Plastics Historical Society collection or indeed any object in the MoDiP collection not currently on display, please contact a member of the MoDiP team to arrange a visit.

With the final two sessions having been delivered in the museum for St. Luke’s Church of England primary school, we reflect back on the Eco-plastic Detective Cultural Hub project and examine why it has had such an impact with our local schools.

To bring you up to date, and since my last blog post, we have delivered 17 sessions to 476 local school children…phew! And I must say we’ve had a bit of an impact.

The art workshop days - led by the ever-popular artist Darrell Wakelam – were hosted in two local schools, allowing more children to get their sleeves rolled up and get stuck into a quality arts project.

Inspired by objects from MoDiP’s handling collection - namely a whale, a Manta ray and a turtle (yes, really…see the images below) the children fashioned fish and sea creatures to feature in and decorate a massive, over-sized water bottle collage and a big single-use plastics recycling bin to be used in their schools.

The idea behind these being, if we recycle our single-use plastics our oceans will be happy and healthy, and if we don’t…they won’t.  A simple message, but a powerful one, and one that children can relate to and play their part in on a daily basis, in their everyday lives.

Looking at the feedback from the Eco-plastic Detective sessions, it is clear that the objectives of the project – to learn about different types of plastics and how they can be recycled, as well as objects made from upcycled, recycled and plant-based plastics – have been met.


Comments from the children at the end of their sessions, when asked what new thing they had learnt about plastics include:
I didn’t know that a plastic chair could be made of wool.
I didn’t know that my cardigan is made of plastic.
I just thought plastic was one thing – now I know there are different types of plastics.
I didn’t know that plastic toys could be recycled into something else.
I didn’t know bouncy castles could make other things – like a pencil case.
I found out that Lego can be made from sugar cane.

So, there we have it. The evidence. This project - Eco-plastic Detective, backed and funded by Dorset’s Cultural Hub - has passed its parole and can be released to freely inspire good behaviour, with regards to our plastics well into a happier, healthier future.