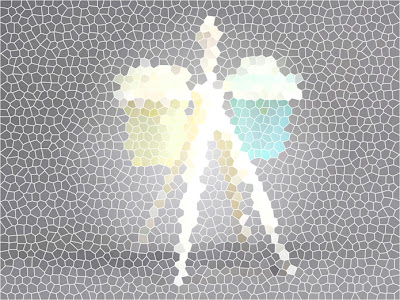 Louise Dennis (Assistant Curator)
Posted by MoDiP at 21:00 No comments:

This seminar will address the character of different plastics, how they have been used and how best to care for them. There will be an artefact worshop to which you may bring objects from your museum about which you would like to know more. We will also look at the future of the SSN and how it can best serve its members. Although the meeting is free and lunch is provided, numbers are limited so please book by contacting Susan Lambert at slambert@aucb.ac.uk


Steve Akhurst was initially trained and employed in aeronautical engineering. Thereafter he lectured for thirty years in engineering, eventually becoming Head of Department of Design and Manufacturing at the . He studied polymer technology at Cranfield University followed by research into structural foam and has been involved with plastics from the late sixties as design consultant for a number of major plastics moulding companies. He has an outstanding collection of moulded plastics artefacts with design or processing significance with a particular interest in plastics table ware. He is currently Chairman of the Plastics Historical Society.

Sylvia Katz is a design consultant and author. She has a degree in Art & Design History from Bristol University and a degree in Furniture Design from Hornsey College of Art, where she was awarded first class honours. She has an outstanding collection of plastic artefacts and plastics related ephemera and has published widely on the subject. Publications include Plastics: Designs and Materials, 1978; Classic Plastics, From Bakelite to High-Tech, 1986; Early Plastics, 1986, and The Conran Desgn Guides, co-authored with Jeremy Myerson, 1990.  She curated the exhibitions At Home with Plastics? and Radical Plastics at the Geffrye Museum, 2001.  She worked at the Design Council, London, for over ten years and currently runs the annual IOM3/Horners Company Design Innovation in Plastics Award for UK students.
Brenda Keneghan has worked as a Polymer Scientist in the Conservation Department of the Victoria & Albert Museum since 1993. She has undertaken extensive condition surveys of objects made from plastic among the various collections of the Museum and for other institutions including the National Trust.  She has lectured on the RCA/V&A MA course in Conservation and on various courses at .  Her research includes the degradation and treatment of synthetic polymeric materials. She organised the successful 2007 international conference on plastics and played a major role in the soon to be completed European project POPART: Preservation Of Plastic Artefacts in museums, which is the first EU project dealing with the conservation of plastic objects in collections.
Mark Suggitt has a degree in History, a Masters in Museology and is a Fellow of the Museums Association. He wrote his MA thesis on early plastics and has a particular interest in modern design. He has published widely and was co-author of Gadgets and necessities, an encyclopedia of household innovations, 2000. Mark was Head of Bradford Museums & Galleries (2002-2008), Director of St Albans Museums (1995-2002) and Assistant Director of Yorkshire & Humberside Museums Council (1987-1995). He was also Keeper of Social History at (1983-1987). He has been a Board member of the Museums Association, ICOM and chair of the Social History Curators Group and the Museum Professionals Group. He is currently Director of the Derwent Valley Mills World Heritage Site.
Colin Williamson is a plastician – an enthusiast for plastics. He has worked in plastics recycling for 25 years and 20 years ago established Smile Plastics Ltd, which he still runs as Managing Director. Smile Plastics pioneered the production of aesthetically pleasing sheets and boards from diverse plastic waste from carrier bags to children’s wellies. He was founder chairman of the trade association for plastics recycling companies and has sat on many advisory bodies considering the eco-aspects of plastics. He is also an authority on the manufacture and development of early plastics. He has built up an outstanding collection of plastic artefacts and is a renowned lecturer in the field. He is a founder of the Plastics Historical Society and co-edited Plastics collecting and conserving, 1999.

Do you know what this is? 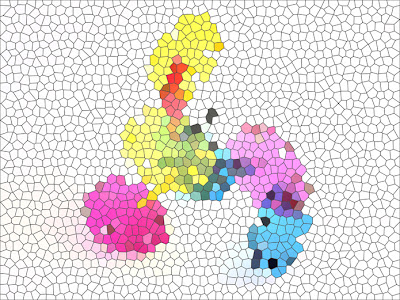 MoDiP is currenlty showing some work by AUB Level 5 FdA in Textiles students as part of the unit:  Innovation for Textiles Practice. 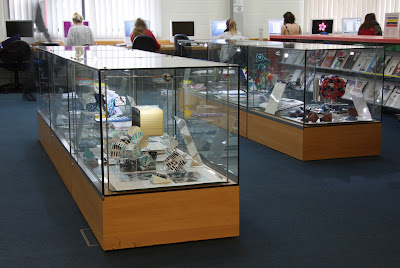 Students were asked to draw a variety of artefacts from MoDiP’s collection arranged as still lives and to develop from them a vocabulary of simple geometric shapes: stripes, circles, squares, spots and lines. The imagery was to be deliberately simple as the emphasis of the unit was on using a variety of techniques and processes at the same time.

MoDiP would like to thank the following students for allowing us to display their work:


To find out more about the project and see the work produced by the students please follow the link to the Inspired by MoDiP web pages.

Louise Dennis, (Assistant Curator)
Posted by MoDiP at 09:00 No comments:

MoDiP has a stand alone case at the top of the library stairs. Here we like to show research by AUB staff where it can be related to our collection.

In celebration of the Chinese New Year Kirsten Hardie, Principal Lecturer and National Teaching Fellow, chose to display a number of items relating to Chinese design and culture from MoDiP, AUB library book stock and from her personal collection.

What could this be?


By looking at this distorted image are you able to guess what the object is? What do you think it could be used for? 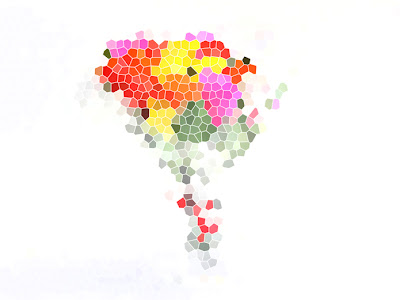 I recently went with Steve Akhurst, Chairman of the Plastics Historical Society, to visit the Fan Museum, Greenwich, London. It is the first and only museum in the world devoted in its entirety to all aspects of the ancient art and craft of the fan. The bulk of its collection consists of folding fans but includes also all kinds of fans including air conditioning fans and fan heaters. Even the Dyson Cooler with its air multiplier technology is represented.


The current exhibition shows the sumptuous fans of Felix Alexandre, fanmaker to the courts of Europe, including to Queen Victoria. The exhibition includes two fans from the Royal Collection and many others with elaborately carved ivory, engraved mother of pearl, and  richly gilded montures, bedecked with precious jewels. 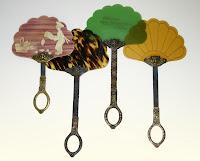 The next exhibition, Fans in the Age of Plastics, will be a contrast in concept if not so very different in terms of visual appeal. Although mass-produced there is immense variety on a theme as shown in these four fans each held in the same mount bearing a cats head and formed in identical moulds. The one on the left is decorated by hand,  the next one looks like it is made of natural tortoiseshell, another bears a printed advertisement for the hotel where it will have been given away, and another is a rich amber with a printed scallop pattern.

We were there to help with identification of the plastics. The exhibition begins with 'nature's own' thermoplastics: tortoiseshell and horn. There follow a large number of fans made from cellulose nitrate in imitation of these natural materials. Today, even the most perceptive of gazes can be deceived by fine-quality imitations. The 1920s example illustrated has combined the function of the fan with a make-up box- note the powder and lipstick compartments and the mirror in its lid.

The biggest challenge from the materials used point of view were the post World War 2 fans.  We thought that most of them were probably made of a variety of polystyrenes.

Also featured in the exhibition will be a number of pocket-size mechanical fans dating from the first half of the 20th century. This British example, also made of cellulose nitrate,  marketed itself as 'as dainty as a butterfly's wing'. These functional yet appealing 'air agitating' devices demonstrate that even the ancient craft of fan-making - virtually unchanged since the 17th century- could not escape the 20th century's ceaseless desire to innovate in the production of all manner of consumer goods.

The exhibition is on from Wednesday 29 February to Sunday 3 June 2012. For more information go to: http://www.thefanmusem.org.uk/. There is a wonderful cafe-come-shop across the road that serves a variety of different kinds of sausages with mixed root mash. Don't miss the exhibition or the cafe!