MoDiP has been fortunate enough to acquire two versions of Sori Yanagi’s Elephant Stool (see image below), a renowned example of Japanese post-war design and believed to be the world’s first completely synthetic stool.

Originally designed by Yanagi in 1954 as a work chair for his studio, the stool was commercially released by Japanese manufacturer Kotobuki two years later, after the company had developed the technology for mass producing glass-reinforced plastic (GRP). This material was first introduced into furniture through the launch of the Eames’ chair in 1950, a one-piece, moulded seat shell which could be combined with a variety of bases. By utilising GRP’s strength and rigidity, Yanagi was able to achieve the stability he required for his sculptural, curved-leg design. In 1960, it won the gold medal at the 12th Triennale di Milano, in a display showcasing Japanese plastics manufacturing and mass production capability.

The unique design quickly became known as the Elephant Stool because the form evoked a stylised trunk when viewed head-on and, because the material was waterproof, it soon became popular for use outdoors: it is quite common to find Japanese examples that have had holes drilled in for extra drainage. Kotobuki continued production until the late 1970s, then only making stools to order until 2000.

That same year, Habitat, as part of its 20th century classics range, collaborated with Yanagi to re-release the stool in GRP with a small, rubber cushion added underneath the seat to protect the furniture when stacked. Unfortunately, quality issues caused production to cease after only a few years. In 2004, it was re-engineered by Vitra, alongside Yanagi, to create a model in polypropylene that was still faithful to the original design. It is these last two examples that MoDiP has now added to the collection, both in white for ease of comparison.

Sori Yanagi (1915 – 2011) was successful in combining his own cultural upbringing with ideas of Western Modernism. He fostered a deep appreciation of Japanese folk art and craft processes through his father, who had founded the mingei movement in the 1920s. He studied at the Western Painting Department of the Tokyo Fine Arts School, graduating in 1940. He then began working with French architect and industrial designer Charlotte Perriand, who was acting as an advisor to the Japanese Ministry of Trade and Industry, where he became interested in product design. Between 1942-1945 he worked as a researcher at the Junzo Sakakura Institute of Architecture and, after a period of military service, returned to Japan in 1946 to begin research into industrial design, opening the Yanagi Industrial Design Institute in 1950.

In addition to the Elephant stool, his body of work includes the iconic Butterfly stool, another celebrated furniture design, as well as a range of porcelain, various kitchenware, an Olympic torch (twice), a bridge and even a motorbike! He also wrote and presented widely on the subject of design, taught at several universities, was appointed director of the Japan Folk Crafts Museum in 1977 and received numerous awards throughout an illustrious career. At the age of 89 he was still advocating designing in traditional ways, starting with pencilled drawings and then sculpting prototypes; a philosophy he called ‘thinking by hand’.

In March, MoDiP was invited by the BPF to provide a short series of webinars about classic design inspired by objects in the MoDiP collection.

One of these talks was inspired by the Panton chair which was designed by Verner Panton in 1960 but the example we have is much later and I will explain a bit more about that shortly but let’s start by looking at the designer and his style. 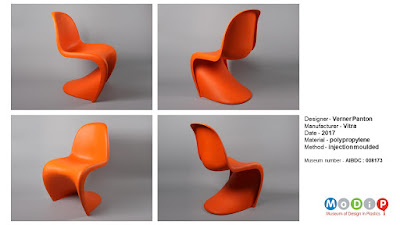 Verner Panton was born in Denmark in 1926, he trained as an architectural engineer at the Odense Technical School and studied at the Royal Danish Academy of Fine Arts in Copenhagen. In his early career, he was employed by John Tommerup, Poul and Simon Henningsen, and Arne Jacobsen, before starting his own design studio in 1955.

Initially he fitted out a Volkswagen minibus as a mobile studio and drove around Europe to visit designers and manufacturers.  This gave him an international outlook.

Below on the right at the bottom you can see his first ‘plastic’ chair (click on the image to make it bigger) – the first of a series of ‘Plexiglass’ chairs 1960, and at the top his inflatable stool from 1961 both from Plus-Linje. 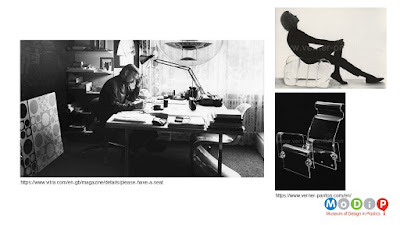 Panton was known for bold, cool, fun interiors which you can see him and his family in here.  These are sculptural, experimental and sensational.  The image on the left of the screen shows his living tower from 1968 with multiple sitting positions.   He wanted to provoke people into using their imagination and to make their surroundings more exciting.

By reimaging ‘the chair’ with its four legs Panton opened up design for others, he took risks and created emotive products.

Colour was important to Panton – he said ‘choosing colours should not be a gamble. It should be a conscious decision. Colours have a meaning and a function.’ 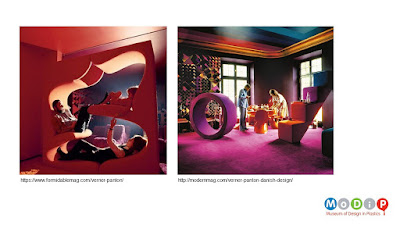 Panton was particularly interested in experimenting with the new industrial materials and technologies that emerged in the post-war period. He developed a cantilever chair in wood during the 1950s but was interested in creating a similar seat in plastics.

Apparently, a stack of plastic buckets in a factory inspired Panton to design a stackable chair made using plastic. He was now moving away from wood which was one of the materials favoured by his contemporaries.

By 1960, Panton had designed a chair that could potentially be mass-produced in a single piece, but due to technical difficulties arising from the use of the chosen material, rigid polyurethane foam, it was not successful.  He worked closely with Danish plastics manufacturer Dansk Akrylteknik who created a prototype in 1962 but not ready for mass-production

The chair was not adapted for commercial production until 1967, when an injection moulded glass-reinforced polyester version was marketed in six colours applied after moulding, this chair was very heavy with high production costs due to there being lots of finishing required.

In 1970, the material was changed to Luran-S, a trade name for ASA (Styrene Acrylonitrile Copolymers), an injection moulded, non-reinforced thermoplastic. There was then a long break in production when the chair fell out of favour in the 1970s. Only to be reissued in the 1990s and is still in mass-production today with new colourways, including a recently introduction glow in the dark version, however, this is achieved by applying 5 layers of phosphorescent varnish by hand to the moulded chair so not really in the spirit of the design. 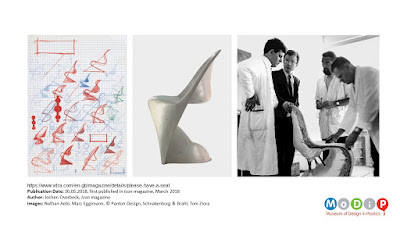 Panton was quoted as stating in 1969 that he believed that the status of objects would change and be questioned, seeing individual pieces become less important and that he was ‘certain that within five to eight years’ time suites of furniture will be made in one piece.’

Ironically, his own chair has become important and iconic, stylish and desirable.

If you look closely on the underside of this black version you can see the structural ribbing which was used in earlier Luran S versions to provide strength in a vulnerable part of the chair – this is not needed in later iterations.

There are a number of ways in which we you can tell when a design has become an icon, one is when it is used in other art forms: 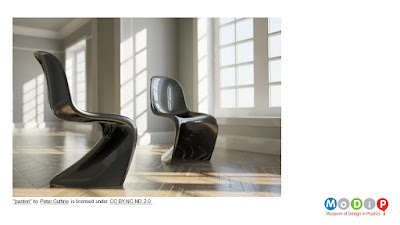 The photographer Brian Duffy used the chair in 1971 in this provocative photo sequence “How to undress in front of your husband” which was published in Nova magazine.  In the 1990s the model Kate Moss was photographed naked on a Panton chair for the front cover of Vogue magazine.

Of course, there should be a nod towards the objectification of women, but that it is for another day. But from the chairs point of view it is still being seen as sexy over period of more than 20 years. 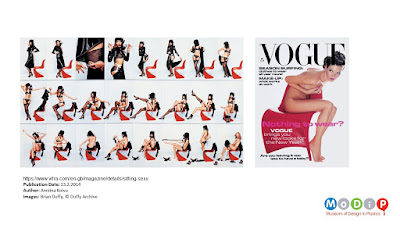 In 2010 Vitra launched a national Panton Chair Competition. In the search for the best customized Panton Chair, architects and designers were asked to present their unique idea for the classic design piece.

All 31 entries were auctioned after the competition and the proceeds went to the charity Shelter.

Here are the top 3 from Jump Studios, Ben Adams Architects and Maris Interiors. 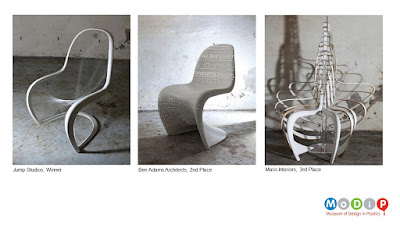 The chair is still produced today and used in a variety of settings.  As we look at this white interior, I want you to think back to Panton’s own interior style – they couldn’t be any more different and yet what links them is the classic, timeless chair. 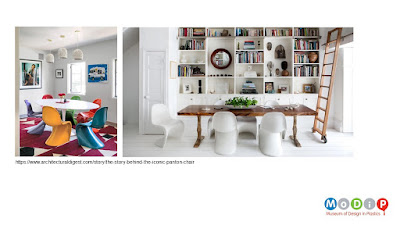 In contrast I would like to share some of the other chairs we have in the MoDiP collection. The chair at the top is the E Series chair was originally designed by Robin Day in 1971 and was based on his Polypropylene chair from 1963. The polypropylene chair was the first mass -produced injection moulded polypropylene shell chair in the world.  The same seat could be used with different legs or mounted in stadium terracing.  This particular form of the seat was created for the educational setting.

The Hembury chair is designed and made by Solidwool, a company based in Buckfastleigh, Devon. The company was conscious that sheep farmers were struggling with a diminishing market for the coarse fleeces of hill and moorland sheep, and they wanted to bring industry back to the area. They now produce hand crafted furniture using a bio-composite material, developed by them, which uses wool as the reinforcing ingredient in a bio-based resin. 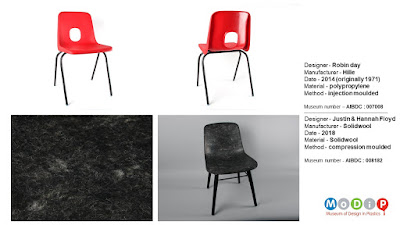 The Flux Junior is a child's version of the one-piece folding Flux Chair. This innovative design started off as a graduation project of Douwe Jacobs. It is made from a single piece of flat polypropylene which is then folded up and slotted together.

The chair at the bottom is made in five blow moulded parts.  After blow moulding the legs and seat, the hollow space is filled with high pressure air which creates strong, structural components. This method of production means the use of the PET it is made of is kept to a minimum and the total weight of the chair is only about 1kg. 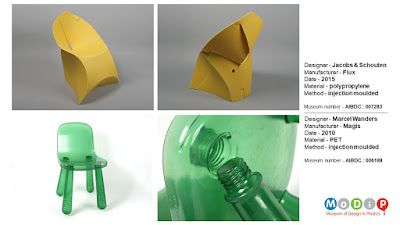 The Oneshot is 3D printed in one piece – not as separate pieces that are then assembled. From a folded position, a gentle push on the central handle makes the piece untwist and unfold into a stool. From an open position, the stool can be returned to its storage position by lifting the handle.

Tom Dixon’s Fresh Fat chair is interesting because it is made of extruded PETG, which is extremely glossy.  The material is then hand-looped meaning that each chair is different with the style of the looping being like an individual’s handwriting.  The image on the left shows where the material has been cut at the end of the process, which I think is a really special feature showing the chair’s handmadeness. 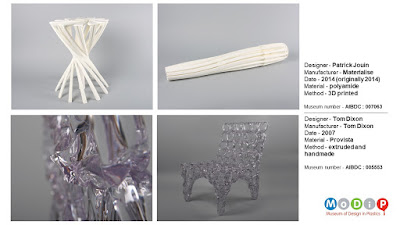