There’s always work to be done if you work in a museum. One of the things I love about a museum career is its variety – researching the collection, working out how to add to it effectively, telling stories about it, talking to people who are interested in its subject area and making sure it’s safe. It has been intriguing to find that in lockdown we have been able to do most of our work from home. Communication with the museum’s audience has been different but perhaps equally effective: our Curator did a webinar with an attendance of 88 people, much larger than we would have got had she been speaking in the museum. There are though some queries we can’t answer without looking at the objects themselves. That provides a welcome reminder that they constitute the museum’s heart and that physical contact with them is essential.

Shortly before lockdown came into force Palgrave Macmillan gave us a contract for the book, Provocative plastics: their value in design and material culture with a deadline of 1 June. It is the book of the conference held at the Arts University Bournemouth in 2015 and is due to be published this December. We are proud of its international character with contributors form Australia, Brazil, Germany and Norway as well as from closer to home.

It adopts a new approach to exploring plastics’ contribution, good and bad, by focusing on their value from two perspectives: as a medium for making and in societal use. The first explores the multivalent nature of plastics materiality and their impact on creativity through the work of artists, designers and manufacturers. The second explores attitudes to plastics and the different value systems applied to them through current research undertaken by design, materials and socio-cultural historians. Plastics have now been the most used materials group for over 50 years. The book addresses the impact of their abundance on world sustainability and elucidates ways in which they can and must be part of the solution.

As the book’s editor, I feel very lucky. There was so much to do to meet the deadline that I was bound to be in my personal lockdown whatever was happening in the wider world. It gave me something to focus on when otherwise life could have been much tougher. The wonderful weather helped but, as I emerge from the tunnel I have been in and relax with the eternal task of the index, I am sorry that it has taken to being dull and rainy although when it does rain I am very grateful on behalf of my garden.

A recent game has been choosing an image for the cover. All the MoDiP team and some of our families joined in with rating potential images. There are three frontrunners – one represents a beach ball in the form of a globe on the sea shore; another shows a stack of very obviously orange plastic chairs again on a beach; and the last one shows a collection of watering cans, mainly green but with the odd blue and orange one too. It will be interesting to see what is chosen in the end.

Before the enforced COVID19 closures, I had been arranging for the ICON Modern Materials Network to visit MoDiP. The day would have included a talk from Fran Conrad, Course Leader for the MA Design and Innovation at the AUB, a visit to the AUB’s workshop to look at 3D printing, and a session looking at the newly installed Materials Library set up by the AUB library team.  We were really looking forward to welcoming the group to MoDiP, but it wasn’t to be.

As you can imagine, I was over the moon to subsequently be invited to join a series of webinars held initially by ICON’s Book & Paper Group, but opened up to the other ICON specialist groups.  The series of talks comes under the heading of Conservation: Together at Home, and it was great to reach out to this audience and introduce them to MoDiP.  We have quite a small space so we would not have been able to accommodate the nearly 90 people who attended.

If you would like to watch the talk, it is available on the Conservation: Together at Home webpage and sits alongside some other really interesting presentations.

We are enjoying the opportunity to explore new ways of engaging with people but we do miss all of our students, colleagues, visiting researchers, external groups, and the general public.

Until we meet again.

Although cultural venues have had to close their doors for the time being, there is still work going on behind the scenes: our Collections Officer is still keeping a careful eye on the physical state of MoDiP’s collections, with periodic visits to ensure that there are no problems; plans are being made for a new way of working once the university re-opens; and the team is still researching, acquiring objects and writing in preparation for the next exhibition.
We have had to rethink the timing of our forthcoming exhibitions but we still plan to offer ‘Beside the Sea’ at a timely point in the year, to coincide with other cultural events on offer in the local area. 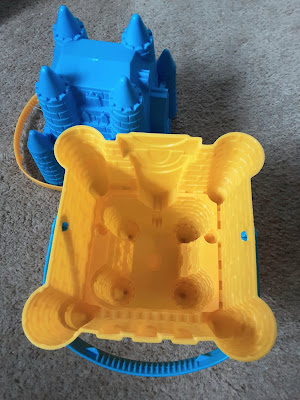 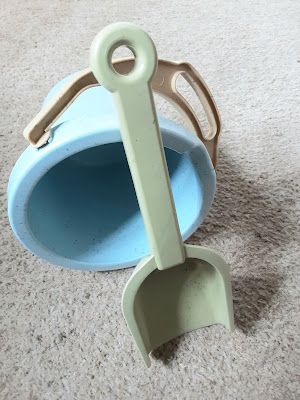 One of the subjects we will be looking at for this particular exhibition, is the ubiquitous bucket and spade. Generations of kids have trundled to the beach armed with a whole host of kit, in that heady anticipation of being free to play, dig, build sand castles, and then run to the water’s edge to fetch water for the moat...only to pour it in and find that, disappointingly, it immediately sinks into the sand. But, undaunted, the attempt to fill up that carefully crafted moat continues, keeping kids occupied for hours. 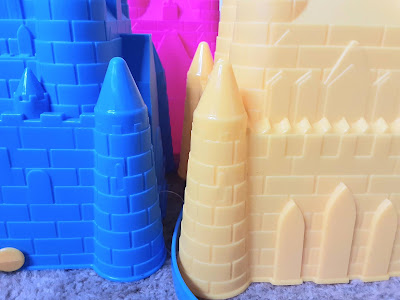 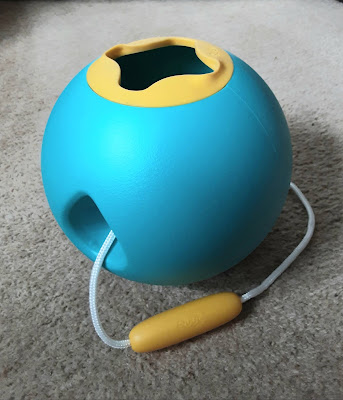 Buckets and spades are a necessity in this pursuit, and I have been finding out that there is a huge range on offer. From the cheap and cheerful variety, which if you are lucky will last to the end of the holiday (or summer if you are fortunate enough to live near the beach),  to the more thoughtfully designed and produced sand sets, intended to last season after season, to be handed down to younger siblings and even through the generations.
It is noticeable though that the cheap and cheerful examples, which can often be bought from beachside outlets, are brightly coloured and very appealing to children, whilst the more costly ones, perhaps made from eco-friendly materials such as plastics made from sugar cane, are often made in more subdued colours. 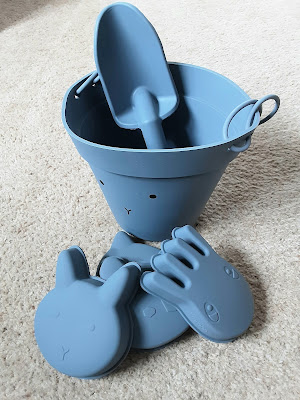 It would be interesting to know which ones kids would pick and which ones parents would choose. What are the features which makes one decide to buy one thing over another?
Children are increasingly environmentally conscious and perhaps would choose something which would endure rather than subscribe to that throw away culture which we are all now weaning ourselves off. Perhaps that’s an experiment for next year. 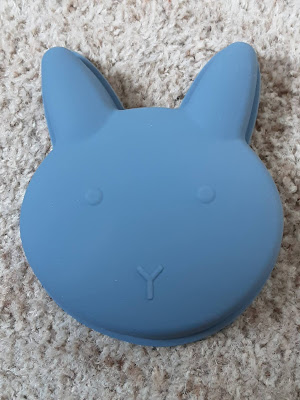 Meanwhile, the work continues and even though we are unable to be with you in a real sense, MoDiP’s exhibitions and collections are always available to you through the website and the team is keeping in touch through social media.

Pam Langdown
Documentation Officer
Posted by MoDiP at 08:30 No comments:

Never has collaboration been so important with regards to how we are working at MoDiP.  During these extraordinary times, we have pulled together, reached out to our partner organisations and pushed and blended the boundaries of our roles for the better good of our students, schools, researchers and public.

For me personally, that meant making my newly written Cultural Hub project ‘Plastics for every body’ - about how plastics can help keep us safe, able and alive - available for teachers and their classes in a new and accessible way.

I wanted to support the amazing work that our Cultural Hub teachers have been doing lately, by providing the project in a digital format, so it could easily be delivered to children either in school or to those being home-schooled. At this point I would like to thank teachers at Heathlands Primary Academy, West Howe, and Canford Heath Infants for their invaluable advice and support regarding the most effective formats and content to use to reach our local children (some living in particularly challenging circumstances).  You know who you are – so thanks a million and I’ve been clapping you on Thursday evenings.

Another collaboration that MoDiP continues to enjoy is the special working relationship we have with Martin Brown, Horrible Histories illustrator. Martin has yet again done us proud, and provided us with a brilliant drawing of the now familiar ‘Mo the MoDiP girl’ for this project.  Thank you, Martin!

And a new and exciting young artist Jake Rowlinson, has also very generously created a stunning illustration of a super hero called ‘Superduper’ (see illustration header) with carbon fibre running blades for us to use for the project - making it just that little bit more exciting for everyone. Thanks Jake, and sorry we won’t get to see you play in your band at Wimborne Folk Festival this year…

Pre COVID-19, the project ‘Plastics for every body’ was to be centred around a museum handling collection and was to include artist-led workshops, with over 500 school children (Years 2 – 4) from five Cultural Hub schools enjoying a museum experience delivered in school, in conjunction with our current exhibition ‘Being me: plastics and the body’


After a dramatic rethink of how we might still be able to deliver this project virtually, and to increase the project’s reach, the content has been rewritten and reproduced with the aim of engaging all primary key stage levels across 15 Cultural Hub schools - so hundreds more children will now be able to enjoy and be inspired by a museum experience provided by MoDiP.

The resources for ‘Plastics for every body’ can be printed out and/or followed on screen (presentations have audio options and are also available via YouTube) both for home-schooling and for use in the classroom.  So, whether children have access to a laptop or just a smart phone – or no access to technology at all and are receiving printed resource packs from school - no child will be excluded. And, with Wellbeing a top priority for school children, a mixture of creative activities and physical mini breaks have been incorporated.

These resources are only available to Cultural Hub schools at this time – so maybe some non-member schools will read this, and be encouraged to join the Cultural Hub collaboration.

Having an excellent working relationship with the Cultural Hub and member schools has been invaluable for MoDiP and demonstrates just how important true collaboration is.  Having worked as an active member of the Cultural Hub last year to create and deliver our Eco-plastic Detective project, I was delighted to have this opportunity to develop yet another one – especially in these extra challenging times for teachers.  We are thankful to the Cultural Hub for reapportioning MoDiP’s funding for this project – and hope it benefits our local children and inspires many future AUB creatives.