MoDiP would like to welcome to the team our new Engagement Officer, Julia Pulman.

Julia is covering for Sarah, who is off on maternity leave.  I will get Julia to write a post introducing herself in the near future, and I have no doubt you will be hearing from her across our social media too.

In the meantime if you would like to find out how you can engage with the MoDiP collection and are:

In 1961, The Blood Donor, an episode of the comedy series Hancock was show on BBC TV. It was written by Ray Galton and Alan Simpson and starred Tony Hancock. It was later remade for the radio which can be heard here:

I think of this because I am off to give blood this evening and can’t do it without thinking of the quote from the programme ‘A Pint! Why, that’s very nearly an armful!’ The experience Hancock would have had in the 1960s was very different from what I will have today, and early blood transfusions were extremely different still. Early blood transfusions would have been made direct from the donor to the patien. I am very pleased this is not what happens today.

Blood banks were created in September 1946 by the Ministry of Health to meet the needs of injured civilians and service personnel. At this time, there were 270,000 donors compared to today’s 900,000 donors but National Health Service Blood and Transplant (NHSBT) are always looking for new donors, especially those who are young, as around half of current donors are over 45, and from black and minority ethnic backgrounds.

In the 1960s glass bottles, that look rather like milk bottles, and rubber was used to collect blood from the donor.

Glass bottles were replaced with plastic packs in 1975. Single use PVC tubes and bags are much more hygienic and help to prevent cross contamination whilst being lighter, easier to store and transport and practically unbreakable.

Additional vials of blood can be taken during the donation process so that it can be tested for a number of infections and diseases that would cause harm to the patient. In 1946 the only test carried out was for syphilis, today blood and plasma donations are tested for many potential infections, including HIV and Zika virus.

Things have changed since I started donating blood in 2000. When I first started, donors would lay down on an almost flat bed and would spend a short amount of time relaxing post donation before getting up. When you felt ready, you would sit straight up and hop off the bed to have your tea and biscuit. At this point some donors would faint and fall off the bed. The recovery position used when a patient faints is completely different from the blood donating position and NHSBT realised that this should be addressed in the new chair through design innovation.

The success of the new blood donor Chair programme for NHSBT demonstrates what is possible in the NHS with a clear vision and strong stakeholder participation. The chair is more comfortable in use, provides all round support to the body in various conditions, and is configured to conform to the new Gold Standard Clinical Pathway for Blood Donation. For efficient, safe and easy handling by staff, the chair breaks down and stacks on trolleys in sets. Renfrew Group International won the contract on a competitive basis via NHS National Innovation Centre (NIC) for the design stages and were engaged directly with NHSBT to collaboratively develop the prototypes and competitively tender for the manufacture and supply of the national requirement. The chair is made of a plastic material that is very easy to clean, lightweight to handle, and comfortable and safe to sit on.

If you are thinking about donating but would like to know what is involved first, this film is very informative. A donation is 470ml which is just less than a pint, you won’t end up with an empty arm as Hancock expected, and the whole process is over within the hour.

More about the benefits of using plastics in the medical and caring professsions can be seen in our up coming exhibition See through.

Louise Dennis (Assistant Curator)
Posted by MoDiP at 14:50 No comments:

Over the past few months, we have been developing a permanent case for the museum space. We have thought long and hard about the content and the stories we have wanted to tell within the history and development of plastics in design

About plastics explores design in plastics through:

One thing we have really struggled with is the layout and application of the text. We had a stab at it but we were never going to get it right as we are curators and not graphic designers.

However, as we are based within the Arts University Bournemouth, we are lucky enough to know a few graphic designers who have the skills to help us.

We have employed the very talented first year BA (hons) Graphic Design students, Catherine Muldoon and Miroslav Ivanov, to help us get it looking good. We currently have an initial draft in place in the case and it already looks so much better than our attempt. 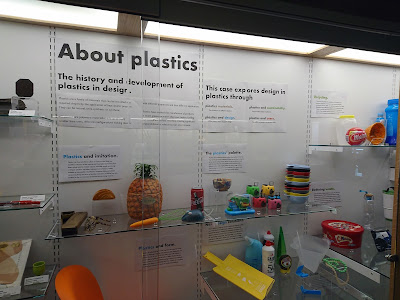 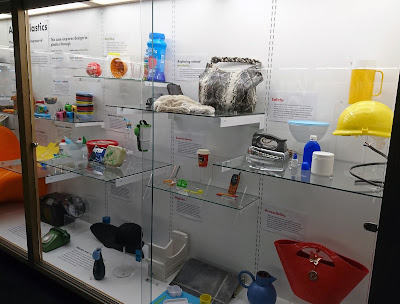 There will be a bit of editing to do before we commit to the vinyl on the wall but we are very excited about how it is coming together.  Thank you Catherine and Miroslav.

Louise Dennis (Assistant Curator)
Posted by MoDiP at 09:30 No comments:

The British Restaurant scheme evolved from the Londoners’ Meals Service, which had been providing emergency feeding centres for people in London.  This included people who had been bombed out of their homes, people who were unable to prepare meals due to interruptions in the supply of gas, electricity or water, or those who had simply run out of rationing coupons. Set up by the Ministry of Food, these community kitchens were run by volunteers in evacuated schools and church halls (typically places with kitchen facilities) and offered inexpensive set meals from 9d (£2.33 in today’s money). As the scheme expanded, the name ‘British Restaurant’ was adopted in 1941 and the restaurants began to cater for all, not simply those limited by war conditions, with the intention of providing an uplifting dining experience to raise morale. By the end of hostilities, over 2000 British Restaurants had been established across the UK.

Each meal purchased could only contain one serving of protein (meat, fish, eggs or cheese) with menus devised by government-appointed dieticians in order to achieve the highest nutritional standards. A typical lunch consisted of a soup starter, a meat based main, and a sweet pudding followed by tea/coffee. Customers purchased a ticket (off ration) before queuing to select their three courses.

By 1942 the increasing demand from the British Restaurants for paper to make meal tickets was notably contributing to the existing paper shortages so Ministry of Food was tasked to create an alternative system. Plastic tokens were recommended with regulations for colour (yellow = soup, red = meat, green = sweet and brown = tea/coffee) and size (1¼” for adults, 1” for children) although in practice these standards were impractical to achieve. Local Authorities were provided with a list of manufacturing firms who could make the tokens, most of which ended up being circular, stamped ‘British Restaurant’ on one side with space for the Local Authority’s initials and any extra information deemed necessary on the reverse.

Customers would purchase their tokens before entering the serving counters and then drop the relevant token into a locked box when served.

MoDiP has a collection of 9 British Restaurant tokens: three are labelled ‘Child’ (coloured white), three are marked ‘Beverage’ (black) and the other three brown tokens are for the ‘Sweet’ course. They are all made of Cellulose Acetate, are punched in the middle and were produced by injection moulding (sprue marks are clearly visible on the reverse side).


We believe they were made for Mitcham Corporation, a district in the London Borough of Merton, and were donated by the Merton Historical Society along with the paper ticket above. So far we have been unable to identify exactly which firm supplied them but we will continue to research this.

There were six British Restaurants in Mitcham, the one at Benedict Road can be seen in this image featuring a ‘Dig for Victory’ campaign mural on the far wall. It is nice to think someone in this photograph may have used our tokens to buy their lunch at some point during the war.

If you want to find out more about the different types of British Restaurant tokens, visit Phil Mernick’s excellent website http://www.mernick.org.uk/br/history.htm and Mal’s Tokens https://sites.google.com/site/malstokens/brit More historic images of Merton can be found at www.merton.gov.uk/memories