The objects in the collection of the Plastics Historical Society are cared for by MoDiP and from time to time additions to the collection come our way.  As the museum’s Documentation Officer, it is my job to catalogue these items so that they can be made available for all to see via MoDiP’s website.  One of the more recent arrivals was an intriguing wooden box containing an amount of Bayko.

For those unfamiliar with Bayko, it was a building construction system consisting primarily intended for model buildings but basic, entry level sets were introduced to appeal to children.


It comprised bases, bricks, windows and doors etc., with metal rods, inserted into the base to hold it all together. 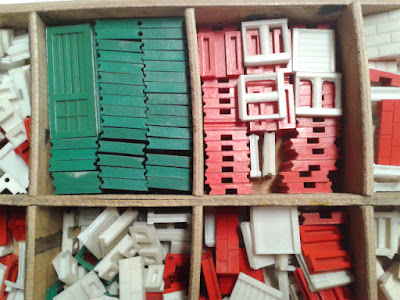 The sets were available from 1934 to 1967.  Bayko was invented by Charles Plimpton in 1933. The material from which it was made came from Bakelite Limited and the sets were initially called “Bayko Lite Construction Sets’.
By 1938 the Bayko name had been adopted and new sets with specialist components were offered. Production was interrupted by World War II when the company switched to production to support the war effort.  It resumed making Bayko in 1946, offering a reduced range of sets.
Charles Plimpton died in 1948 and his wife Audrey Plimpton took over the running of the company. Audrey Plimpton retired in 1959 at which point the company was sold to Meccano Ltd, whose magazines Bayko had been advertising in for 25 years. Meccano Ltd redesigned the sets, added to the number of sets available and began to make the parts from polystyrene to cut costs.  Subsequent years saw other changes such as the introduction of flanged bricks and limiting the colours available, under the ownership of Tri-ang, who bought out Meccano Ltd, but eventually demand for the sets fell. By 1967 all manufacturing of sets and spare parts ceased.
MoDiP has its own example of Bayko which has been on display a number of times, but if you would like the opportunity to examine either of the two sets in our care please make an appointment with a member of the MoDiP team to do so.

With Easter fast approaching, I was particularly pleased to find this little gem amongst objects recently acquired as part of the collection of the Plastics Historical Society. 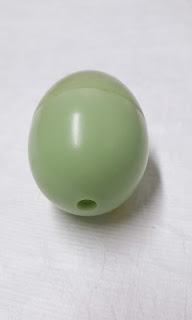 Small and perfectly formed, this small green egg contains two simple bases which push into the upturned half egg shells, to form a pair of egg cups.  Made from green urea formaldehyde we think it dates from the 1930s, but it has no makers marks to help us with identification. 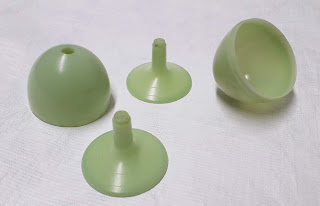 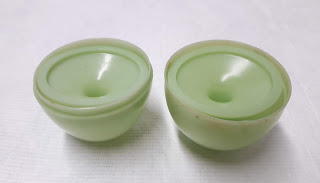 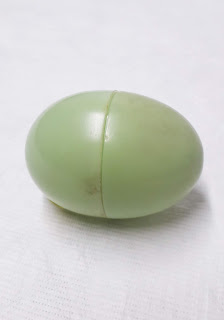 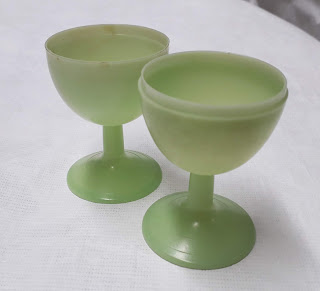 Egg cups can perhaps be seen as a miniature manifestation of the prevailing stylistic influences of the time in which they were made, with the colour and materials used as extra clues to their date of making. So many of them are unmarked and the ones we have here in the collections of MoDiP and the Plastics Historical Society include many anonymous examples.  There are, however, examples from well-known makers such as Bodum, Tupperware and zak!, and for those particularly interested in older plastics materials, Ranton, Mendel Brothers, De La Rue and NB Products.   We even have an example of the Yowk pot, packaging designed to hold a healthy on-the-go snack of a pre-boiled egg, breadsticks and seasoning.  The packaging is designed in such a way that when turned upside down, the top becomes an egg cup.  This idea was short lived because of inconsistencies in cooking the eggs.

If you would like to come in and see any of these objects, or anything else from the collection, please contact a member of the MoDiP team.

Agency workers started to observe people using the bucket without the lid - an integral feature for the transport and storage of safe drinking water. The previous cap had been so small, that filling the bucket from a tap, pump or spring had been too difficult, resulting in the lid being removed and inevitably never replaced. The buckets then began to be used for carrying food and washing clothes. Consequently, Oxfam redesigned the lid to include a rim-lock system, so once snapped onto the bucket it is very difficult to remove. The cap opening was also made bigger to not only ease filling but allow easy access for cleaning.

Made from polyethylene, the bucket offers a safe solution for water storage, protecting from pollution and further contamination. It has become established worldwide as a standard safe water container, and is used by many other relief agencies including the UN and the Red Cross.

We would like to thank Oxfam for donating this bucket to the MoDiP collections - and you will soon be able to see it on display in the 'About Plastics' case in the museum.

Nylon: ‘the durable and indestructible material of the people’

In 1928 Wallace H. Carothers, an organic chemistry lecturer at Harvard University, joined DuPont, a chemical manufacturing company, to lead a research team identifying potential commercial uses for different polymers. After several years of experimentation, the chemists produced a material that could be drawn out into long, thin strands which were extremely strong and durable. It was patented in 1937 as nylon 6,6.

Nylon is not just one material but instead refers to a family of very similar polymers known as polyamides. The original and most commonly used of this family was nylon 6,6 but other chemical manufacturers wanted to reproduce it without breaching the patent on its production. Many different versions have since been created which in turn all have different properties eg. nylon 6, nylon 6,12, nylon 4,6 etc.

The first commercial product to use this synthetic material was Dr West’s Miracle Tuft, a toothbrush with nylon bristles released in February 1938. DuPont soon realised nylon’s characteristics were ideal for the hosiery market and built a factory in Delaware the following year that ran for 24 hours/day, producing enough yarn in its first year of operation for 64 million pairs of stockings. Introduced to American consumers on 15th May 1940, 800,000 pairs were sold on that first day.

At a cost of $1.15 per pair, they looked like the more expensive silk stockings but were cheaper, more robust and easier to care for. But no sooner had they appeared on the shelves of department stores across the United States, they disappeared as the country entered the Second World War. Supplies became severely restricted as output was channelled into military use with nylon producing such vital equipment as parachutes, tents, mosquito netting and hammocks. As soon as the war ended DuPont resumed stocking production with demand quickly exceeding supply: newspapers reported ‘nylon riots’ taking place as thousands of US women mobbed stores with limited stock.

The first British made ‘nylons’ appeared in 1947 such as the pair featured in the photograph above from MoDiP’s collections and currently on display in the Plastics & the home front exhibition. This exhibition is in support of Dazzle & The Art of Defence.

Since then nylon has become ubiquitous. Continued innovation and development has led to the creation of a wide range of nylon-blended fabrics that produce inexpensive, colourful, wash-and-wear clothing and the material can also be found in products ranging from kitchen utensils to medical implants.

MoDiP has over 280 objects made from polyamide (nylon) including some fantastic 3D printed pieces that can be viewed or borrowed for inspiration.

A few interesting facts about nylon: