My initial inspiration for this project was the large archive of photographs in the MoDiP collection. The majority of them are black and white and show British plastic factories and workers of the 1960’s and 70’s which was a time when there was a massive increase in demand for plastic items. It amazed me how this microcosm of society was captured in such great detail, and what drew my attention the most was the people that worked in these factories, their hairstyles, their choice of clothing - the people behind the plastics.


At the same time I was being inspired by the objects in the museum, and I was immediately drawn to the items that had partial transparency or translucency, an interest that I have had since childhood: a curiosity of how things worked. This began my interest in layering in my work.


I wanted to combine my two interests: the archive photographs, transparency and layering. So, I stared to cut into photograph print outs and made watercolour patterns behind them which were inspired by MoDiP objects. The pattern behind the piece below was inspired by the cogs I had seen inside the transparent clock above.

I wanted to use my watercolour paintings to draw attention to the workers, and to express the excitement about plastic that was happening in the time period. These plastic factories were churning out objects that were giving people joy.

I continued to experiment with paper cutting and watercolour, and cut out different subjects to see how that would affect the feel of the piece:

When I made the rubber duck pattern I realised that the use of children’s toys in my work really conveyed the feeling that I wanted. In these factories they were creating items that were exciting and fuelled the imagination for children. Most of us will have had plastic toys when we were children, so I think it’s easy for my work to relate to everyone.
I was still thinking about transparency, and so I experimented with printing the photographs on tracing paper. I also wanted to make my pieces less flat, so I began using foam pads for some of the objects in my patterns.

I still felt that it could be more 3D, so that it would make more of an impact on the viewer. I was inspired by paper theatres and paper cut greeting cards when I made my final pieces for this project:

Each one of the three contains watercolour objects that are construction toys that are in the MoDiP archive. I wanted there to be a theme such as construction between the three so that they are all linked, and I used yellow in all three for the same reason. I think that the depth of the work really brings it to life as it becomes its own world, and the viewer can look at them from different angles to access more of the images/paintings. It’s immersive and frantic looking, which is exactly what I was going for!
I am very excited to see my work on display and I am very thankful to the MoDiP team who gave me this opportunity.

Ellie Jones - MA Illustration
Posted by MoDiP at 08:00 No comments:

Being me: plastics and the body

Due to the Covid-19 outbreak the museum is closed along with the rest of the AUB campus.  As such you can't come and see our new exhibition in the flesh (as it were) but you can still enjoy it on our website.

The problems that plastics can create for the human body are now becoming better understood. Plastics materials cause health issues for people in a variety of ways, most notably through microplastics entering the food chain via pollution in our seas, and when chemicals, such as bisphenol-A (BPA), leach from containers through our food and into our blood streams. However, through good design and use, plastics materials enable us to maintain our bodies and express ourselves in ways that empower us to be human. 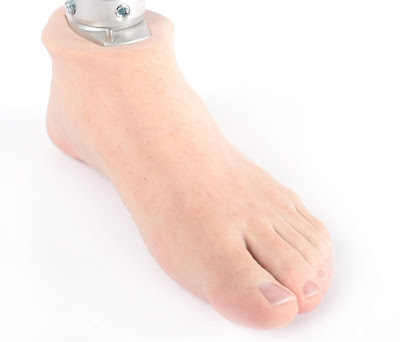 Being me: plastics and the body explores the ways in which plastics materials, and the products made from them, help us to be ourselves; by changing our shape, keeping us safe, aiding us when our bodies struggle, and by keeping us alive. From with life-like qualities prosthetics, supporting amputees both physically and emotionally, to sportswear that helps athletes move faster and more efficiently, the objects on display show the ways we can maintain our physical attributes and become superhuman.

Louise Dennis
Curator of MoDiP
Posted by MoDiP at 14:48 No comments:

Email ThisBlogThis!Share to TwitterShare to FacebookShare to Pinterest
Labels: Exhibitions

From the beginning of this month (01/03/20), New York became the eighth state in America to impose a single-use plastic bag ban. Many countries have already phased out the ‘disposable’ plastic bag including Bangladesh, the first to do so in 2002. In the UK, a 5p plastic bag fee was first introduced in 2015 with much debate ever since over the number of bags that have been removed from circulation.

But, plastic bags were never meant to be a single-use product. Invented by Swedish engineer Sten Gustaf Thulin, in 1959 he developed a method of creating a simple one-piece bag from a sheet of polyethylene. Cheap to produce, durable and strong, Thulin intended this to be a replacement for paper bags and mass deforestation; he envisioned this bag as something to be valued and re-used.

It made me start to think about the ways that people have used plastic bags in their creative output, eg. valuing the material in repurposing an everyday object or using it to communicate a message.

This giant teardrop sculpture by African artist Pascale Marthine Tayou was on display at the Armory Show in New York City last year. Entitled ‘Plastic Bags 2001-2010’ the work was originally created in 2011 as part of an exhibition at the Queensland Gallery of Modern Art, Australia. Tayou compared the plastic bags to people, describing them as both ‘useful and dangerous’ as a comment on global consumerism.


Another plastic bag sculpture was created in 2012, by Dutch artist Florentijn Hofman. 40,000 plastic bags were used to create two huge slugs that stood on the streets of Angers, France as part of the Accroche-coeurs Festival. Volunteers first knotted the bags onto plastic netting which was then attached to a metal framework. Measuring 18 metres in length and standing 7.5 metres tall, the ‘Slow Slugs’ were on show for 3 days, appearing to move as the bags caught the wind. Hofman declared that they were ascending the steep steps of the city heading towards a church, signifying their slow crawl towards death.


In 2012, the Gewerbemuseum in Switzerland curated an exhibition entitled ‘Oh Plastiksack!’ including objects, paintings, photographs and performance pieces from 30 international artists and designers, exploring and celebrating the plastic bag. The installation ‘Plastic Garbage Guarding the Museum’ by Madrid-based design collective Luzinterruptus, seen in the image below, was on display at the front of the museum to entice visitors inside, who could then exchange a used plastic bag for free admission.


Martinican artist Jean-François Boclé’s installation ‘Tout doit disparaître!/Everything must go, 2004’ used 97,000 blue supermarket plastic bags to form a memorial to the lives lost at sea during the transatlantic slave trade. The inflated bags were put on show at the Saatchi Gallery in 2014.

Here, in the MoDiP collections, you can find two amazing objects made using plastic bags. The first is a tote made by designer Kate Ward in 2009, created by crocheting long strips of carrier bags together.

The second is the 21st century ruff, made by artist Laura Anne Marsden from plastic bags worked in the 'Eternal lace' technique, combining hand-stitching and needle-lace making with various heat processes to change the properties and appearance of the plastic bags.

We also have a large number of individual plastic carrier bags as well as photographs showing the bags in early use. All of these objects form an important part of the museum’s contemporary collections that reflect the recent past but which will be unobtainable in the future.