In search of early plastic chairs

I am looking for help in finding examples of early plastic chairs from the UK and for information on a New York-based company active in the 1930s-1950s.

The earliest plastic chairs that I have come across were designed for New York-based Grosfeld House in the late 1930s. They appear to have been quite a significant furniture retailer, with a large showroom at 320 East, 47th Street and moved into manufacturing (or at least branding) their own products. They appear to have been quite prolific - an internet search usually shows several items still changing hands on the secondary market. Lorin Jackson was one of the designers working with Grosfeld House in the early days and among his work was the chair shown in Fig. 1 made from acrylic glass in 1939. Some other examples of the company’s early experiments with plastics are shown in Fig. 2 and Fig. 3. In the mid-1950s, the company launched a fifty piece collection of wooden furniture designed by Vladamir Kagan.

Despite this impressive pedigree I have been unsuccessful in finding much information on the company, apart from the adverts shown in Fig. 4 and Fig. 5. New York museums have nothing at all on the company (Winterthur Museum, Smithsonian/Cooper Hewitt, MoMA and New York Historical Society).
The Hollywood Regency inspired chairs produced by Grosfeld House are the earliest attempts at using plastics to make chairs. Significantly, they pre-date the more famous chairs designed by Ladislas Medgyes for Helena Rubenstein’s New York apartment in 1941 (often attributed as the first). I would like to find out more about the company and their early interest in plastic for furniture and the materials they worked with. If anyone has any information about the company or any of the designers that worked with them it would be great to hear from you.

From the UK the earliest plastic chair I have found is Robin Day’s Polyside from 1963. I think there are probably earlier examples and would be very interested in any tips or information about the early plastic furniture market in the UK.

I am a PhD candidate at the University of Technology Sydney. I am tracing the history of the plastic chair and focusing on how product designers are responding to the environmental emergency by experimenting with renewable carbon-based plastics (recycled plastics and bioplastics). Please do get in touch if you can help!

We are an AUB student team from the Creative Events Management course and we are running a competition to promote the re-launch of MoDiP's MyPlastic exhibition. The competition is open to everyone, students and the general public, for the chance to win a cash prize of £100. 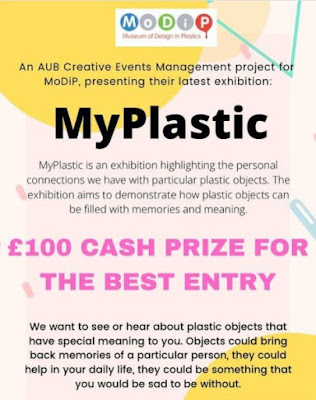 You may not realise that plastic is an important part of our daily lives. The idea of the competition is to highlight this by asking you to share with us a plastic object that is important to you; it could be your 3D printer, a piece of sports equipment or your favourite cooking utensil.. get creative!

The entry can be in the form of a video, picture or a piece of art inspired by your plastic object. It really is up to you. Why not check out the MyPlastic exhibition on MoDiP's website for inspiration?

For more information and updates:

Following on from Pam’s blog where she talked about plastics research and MoDiP’s 2013 crowd sourcing data project, I am looking for help to find out more about a particular object that I have donated to the museum (see image below).

Whilst we have been working from home, one of our tasks has been to prepare for future MoDiP exhibitions and so, back in the Spring of 2020, I began research for Friend and faux. One of my cases looks at secretions and how plastics have enabled us to find alternatives to animal substances such as cellulose acetate replacing natural silk in stockings. Thinking about silk thread, I suddenly remembered that I had a reel of plastics invisible thread in my sewing basket, something I had inherited several years ago but had so far never found a use for.

On close examination it appeared to be a nylon monofilament and my first online search to find out more about it turned up a reference in a June 1966 edition of the Aeromodeller magazine. In an article entitled ‘Scale commentary’, the author refers to Kleintex invisible thread as being available in either brown-tinted (my example) or clear, and being useful as rigging to tie up strut ends (McHard, 1966).

My next find was from The Guardian newspaper dated Friday, 26th February 1965. It reported that a contract had been signed by the Nottingham firm of Kleintex to supply 500,000 reels of transparent sewing thread to Australia. It also mentioned a similar contract being arranged two months prior going to Africa and a further edition of the paper included an advert (dated Monday 27th September 1965) with part of the company address visible: _ _ _ er Gate, Nottingham.

Using this geographical detail, I then found a book that referred to a meeting between the author (a journalist in Nottingham at that time) and the owner of the business:

“… a businessman named Alan Klein rang me to say he had invented an invisible thread would I like to see it! I did a double take and asked how I would be able to see it. I was sure I was having my leg pulled, but it was true. I went to his factory and he showed me his transparent nylon thread which he called Kleintex invisible thread. I wrote the story because it fascinated me and the thread went on to revolutionise clothing manufacture and make Alan Klein a millionaire.” (Scott, 2013).

I contacted the author (who now lives in Australia) to see if he could recall where the factory had been but unfortunately, he could not remember the exact address and I was unable to source his original article as the newspaper has not been digitised (remember this research was being done from home during the Covid-19 lockdown!). MoDiP’s good friend Colin Williamson, a polymer specialist, also very kindly had a look through his collection of plastics directories and catalogues for me but was unable to identify anything listing the tradename, the company or the owner.

The only other reference I was able to find online at that time was the winding up of the company (no pun intended) on the 15th September 1967, notified via The London Gazette newspaper. Sadly, the trail ended there and as lockdown ended and we returned to work, other jobs to be attended to in the museum took priority.

But then the second national lockdown happened. Finding myself working from home again, I revisited my earlier research and almost immediately found this available for sale on a popular online auction site, which I have been able to acquire for the museum:

Now we have the full address of the company and some wonderful contextual information to support the objects, as well as an example in the collection of both colours that had been originally manufactured. I have still been unable to identify a related patent or find out anything more about the company, the owner or the thread but I will be asking Pam to keep an eye out when she next delves into the MoDiP Reference Library.

If anyone reading this blog has any information to add to the story, please do get in touch.

Scott, E. 2013. I could have been a contender: the memoirs of a black sheep, (online) Bedfordshire: Andrews UK Limited. Available at: https://books.google.co.uk/books?id=6Ha6BAAAQBAJ&pg=PT171&lpg=PT171&dq=kleintex+invisible+thread&source=bl&ots=MYWbZh0mIG&sig=ACfU3U0WYZYH--OgEYOMij3d09Hr_1regg&hl=en&sa=X&ved=2ahUKEwi8v9z8kuPpAhXVURUIHWD7BzkQ6AEwAXoECAoQAQ#v=onepage&q=kleintex%20invisible%20thread&f=false (Accessed June 2020).

Just before Christmas 2020, MoDiP acquired a beautiful Pago Pago vase, designed by Enzo Mari in 1969 for Italian manufacturer, Danese Milano. Mari (b.1932 – d.2020) was a renowned design theorist who both practised and taught throughout an illustrious career that resulted in the creation of over 1500 objects.

Made of ABS (acrylonitrile butadiene styrene), the vase was designed with flexibility in mind, being reversible. A single bloom can de displayed in the narrow opening but turn the vase over to place a bouquet into the wider mouth. The double vase shares an interior wall to enable a two-part mould in manufacture, with a double bevel included within the design to conceal possible moulding shrinkages.

Even evidence of the injection moulding process has been made into a feature – the gate/sprue mark has been positioned in the centre of the narrow end of the inner cone: Mari referred to this as a ‘slug’.

Essentially, the vase is made up of two truncated cones, one smaller one upturned within the other, with half of the outer side cut away and new supporting radial walls connecting both structures. The base has also been opened to enable access to the internal frustoconical body. Confused? The drawing in the patent (below) should help to make things clearer.
Mari spent a significant amount of time researching different flower types and sizes in order to determine both the functional requirements of the vase as well as its colour, to show off the blooms to best effect (it was made available in white, yellow, orange, green and violet – MoDiP’s example). He aimed to create something that was versatile, to remove the need to purchase a variety of different shaped containers, but that was also elegant and affordable.
Alessi re-issued the Pago Pago in 1997, recognisable by the company imprint on the bottom.

Often described as one of his most notable works, the complex structure of the plastics vase aptly fulfils Mari’s philosophy of designing both aesthetically and functionally, whilst doing justice to the material. He sadly passed away in October 2020, aged 88, due to complications related to Covid-19.
Katherine Pell
Collections Officer