The methodological potency of ‘happening upon things’

MoDiP was pleased to contribute a workshop to the AUB Research Conference 2018, which focused on research methodologies.


Our workshop set out to try out ideas put forward by Nicholas Thomas, Director of the Museum of Archaeology and Anthropology in Cambridge, in The return of curiosity – what museums are good for in the 21st Century.  His starting point is:  ‘If the world of research embraces a bewildering range of methods, there is nevertheless something peculiar (I mean both distinctive and odd) about that of the museum, which begins less with discourse or theory, with a problem inherited or framed, than simply with stuff – with works, artefacts or specimens of whatever kind.’  He sees this as a strength and believes museums have a role not simply as sources of inspiration but ‘as creative technology’ akin to digital technology in their ability to make new connections and thus new thoughts. Central to his idea is the scope that museum’s provide for ‘happening upon things’.


The workshop took place within the museum where a collection of some 50 somewhat random objects had been assembled for participants to ‘happen upon’.  They were asked to choose one of them and share what it said to them with the group. For example a Jif lemon  brought back memories of happy childhood holidays; Philippe Starck’s Juicy Salif juicer  proclaimed both the importance of design over function and a retro-vision of the future;  a cycle helmet spoke of safe travelling; and a toy embodied the learning it provides.


Then, sticking with the same object, participants were asked to think up as many ways as they could of classifying it. 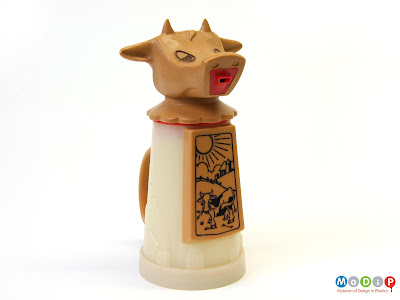 For example this milk jug was classified under these headings:


The final exercise was undertaken working with a partner. The assignment was to develop a narrative around the two randomly brought together objects they had each chosen at the outset and to add a few more objects from those on the table.


These are the results. 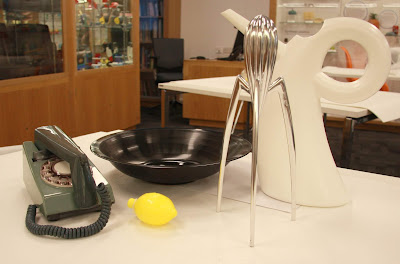 John Cage was a composer and a pioneer of indeterminacy in music. These objects are all capable of making music. 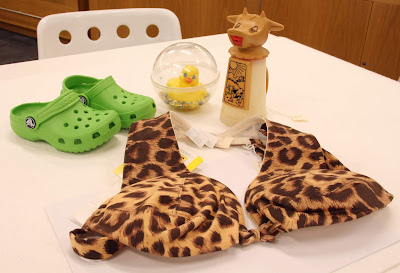 A narrative of nurture from birth to knowledge:  the cow representing milk symbolic of motherly love, the bra the nurturing breast, the shoes representing childhood and the toy, a means of learning though experience. 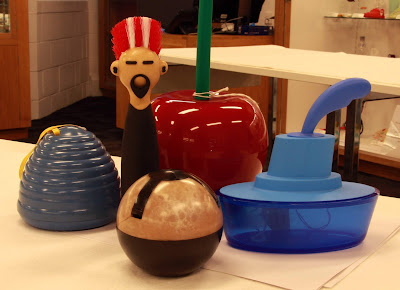 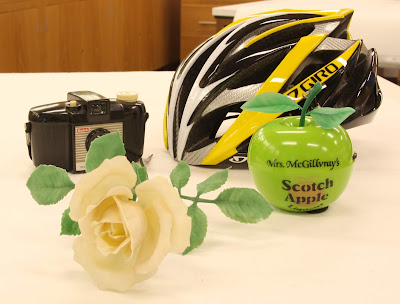 
Once participants had selected their objects the session facilitators put together their own group of objects from those remaining. 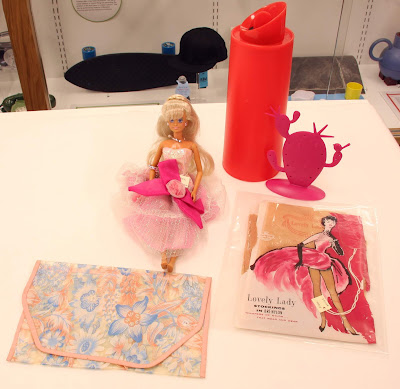 This group of objects explores the use of pink in marketing to products to young girls.

Susan Lambert (Head of MoDiP)
Posted by MoDiP at 09:00