As animation students, our project revolves around bringing animation into a more physical dimension by using plastics. We plan to do this by producing a 3D printed zoetrope using characters modelled and animated within the computer.

What is a Zoetrope?

‘A zoetrope is one of several pre-film animation devices that produce the illusion of motion by displaying a sequence of drawings or photographs showing progressive phases of that motion.’

Traditionally, zoetropes are 2D animations akin to flip books, in that you view the animation through small slits in a spinning device. However, thanks to modern plastic technology our project will consist of several 3D printed models, spinning on a base with a flickering light to create the illusion of movement. We plan to illustrate chaos within the piece, by combing multiple characters undertaking their frenetic actions at the same time.


Who is working on this project?


We are a team of around ten 2nd year Animation Production students from the CG pathway of our course. This project was initially pitched to us by our lecturer Ian House, as an extra project to assist with the learning of CG, and as a way of showcasing animation to those outside of the course.
We assigned roles in order to treat the project like any other animation production. The main roles are as follows:

Initial Designs of the Characters

We began by developing the characters that we would be modelling. We had to keep in mind the simplification of the design for ease of modelling, as well as for animating and printing. The characters were based on previous projects, and these will be developed further throughout this project - predominantly being brought together and informed by the MoDiP collection, whether it be references, design ideas, or miniature poly versions of objects brought to life within the scene. 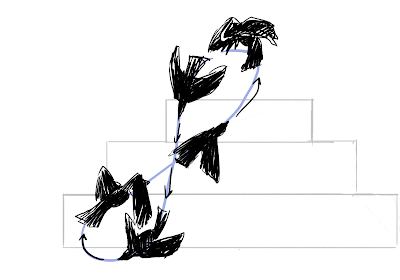 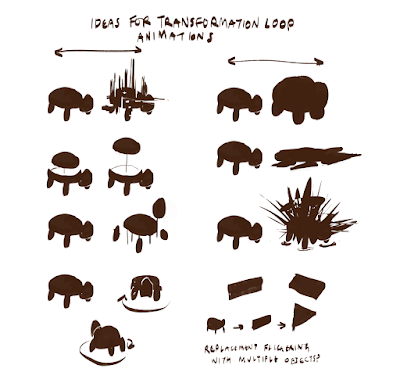 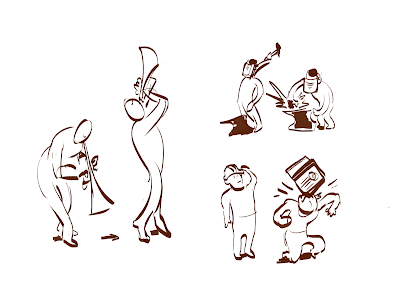 Here I have shown thumbnails of the early stages of developing the animations. As well as the moving characters, we could perhaps include morphing object animations, to add to the overall chaos of the scene.

Our first job going forward, is to get the roster of characters modelled and rigged using Maya software. Beyond that we will be making basic 2D animated tests, and then transferring those animations to 3D.