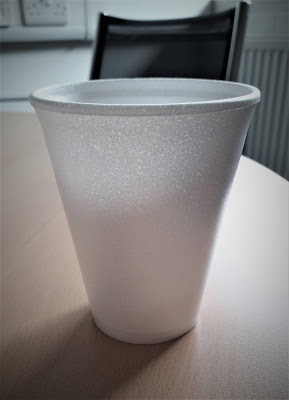 You might be wondering what’s so special about a humble disposable expanded polystyrene cup and why it warrants a place in the Museum of Design in Plastics collection.

It is an object that most of us have encountered at some point in our lives, but we now might do less frequently as manufacturers and take-away retailers respond to consumer demands for more environmentally friendly materials. But the fact remains, that expanded polystyrene does a great job when we want to retain the heat of our food and drink. It is cheap to produce, lightweight, so transport costs are low, and contrary to popular opinion, it can be recycled when the infrastructure is there.

This rather fragile little cup has its origins in mid-20th century USA when American company Dart developed their first disposable hot drinks cup.   Dart Manufacturing Company was established in 1937 in Mason, Michigan, USA, manufacturing products such as plastic key cases, steel tape measures and ID tags for the armed services. In the late 1950s they had begun to experiment with expanded polystyrene foam and they began production of the first 6oz insulated foam cup in 1960. 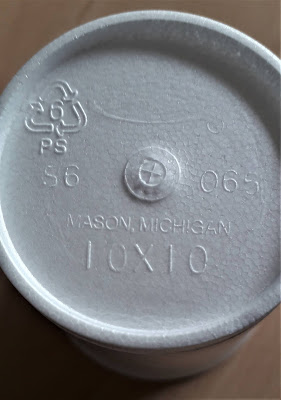 By 1962 they had expanded their range to include 8 and 12oz cups and an 8oz food container, and in 1963 they changed their name to Dart Container Corporation.  Throughout the 1960s they expanded production and their range, opening plants across the USA and in 1965 fulfilled their first order for 1 million cups, to one customer in 1 month.

In its first half century, Dart grew to become a global corporation with a range of more than 600 products for the food services, retail and packaging industries and is the worlds largest producer of single-use foam cups and containers.

With an awareness that the recycling of expanded polystyrene is not as commonplace as the recycling of other plastics, Dart opened its free public EPS recycling facility in the West Midlands, UK in 2011. The company has an active environmental policy with many initiatives to limit or eliminate the impact of their products. 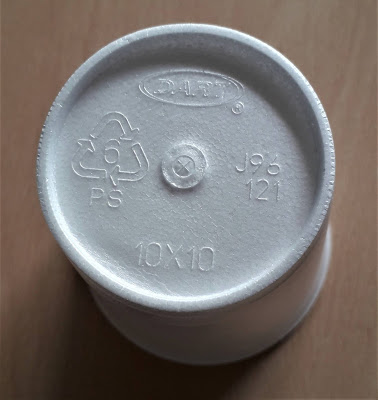 So next time you find yourself drinking from an expanded polystyrene foam cup, take a moment to look on the bottom. Chances are it will carry the DART logo and with it, decades of history.

Email ThisBlogThis!Share to TwitterShare to FacebookShare to Pinterest
Labels: Design, history of plastics, Importance of plastics, Plastics and industry, plastics and the environment, recycling