MoDiP provided the perfect solution to my ’90 year plastics quandary’!

My late father, Graham Shelswell, was born in 1932 and was brought up in Wellington Street, Oldbury, which is only a stone’s throw from the British Industrial Plastics factory site.

He lived there with his father and mother, William and Ethel Shelswell, and his maternal grandmother Harriet Hall (nee Horton). Harriet Hall was a widow and worked at BIP Oldbury as a cleaner. Her husband John Prestwood Hall was fatally injured in a ‘boiler accident’ in 1915, at BIP Oldbury where he also worked; I believe it was then called British Cyanide. As Harriet was widowed in 1915 (approx. 40 years old), she had to bring up her six daughters as a single mother (see image below). 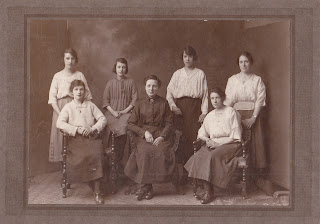 As a cleaner at BIP, when the factory produced new pieces such as Beetleware and Bandalasta-ware, they would give Harriet some of the experimental items to take home. These have stayed in the family ever since.

As I grew up in the 70s, I remember visiting my grandma and seeing these plastic items on display in her cabinet. They were so unique and varied in shape and a mixture of colour, so vibrant and different to the rest of her home furnishings. On occasions, I was allowed to carefully take them from the cabinet and look at them a little more closely, with the eyes of an inquisitive child.

They were then, and still are today, in excellent condition. I have been told that my great grandma treasured them because of their uniqueness back in the 20s and 30s when they were originally made. They were then handed down to my grandma, who had them on show for many years as she lived in to her 90s, and then to my father, who stored them away safely as they held memories of his childhood and hometown of Oldbury.

Harriet Hall continued working for BIP Oldbury until she retired. She was one of the company’s first pensioners (see image below) and, as such, BIP continued to look after her financially as she had lost her husband in an accident on the company site.

And so, four generations on, the BIP Plastic Ware came into my possession. I did not want it to sit in a box in a loft for decades to come; I wanted it to be seen, to be valued, to be studied, and to be appreciated by a wider group of people. The collection is around 90 years old and in searching for somewhere who could take care of it for another nine decades (and more), I came across MoDiP. I studied their website, which I thought engaging, academic and educational, and yet it also had a sense of energy and enthusiasm with a passion for ‘plastic’. I contacted the museum and they accepted the collection of these 26 pieces. They will take over their stewardship and continue the story of these plastic ‘originals’.