Forty-two years ago today pop came to the world of typewriters. The Valentine typewriter was launched on 14 February 1969.  It was designed by the late Italian architect and designer, Ettore Sottsass, with the British designer, Perry Ellis, for the Italian firm, Olivetti. 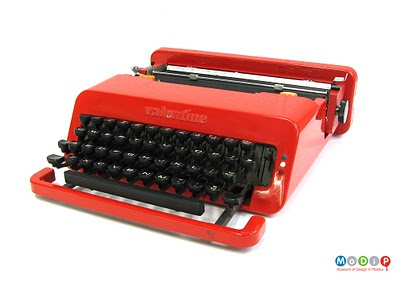 Most often manufactured in red it was also came in white, blue and green. It was not aimed at the office worker but rather at the private individual and was sold thus through department stores and book and record shops. It was marketed in a set of posters designed by Milton Glaser which showed it with a wide range of different types of people in different countries. Sottsass is said to have designed it as 'a kind of 'biro' among portable typewriters' . Certainly it was light being made of acrylonitrile butadiene styrene, a type of rigid glossy plastic. Richard Burton is said to have been seen in 1970 at Heathrow airport with a Valentine typewriter on one arm and Elizabeth Taylor on the other.  However although it was the product that made Sottsass a household name and is now widely sought after as a design icon, it was not a commercial success. Sottsass became disillusioned with it and said it was 'too obvious like a girl wearing a very short skirt and too much make-up'. One and a half years after its launch production ceased.
An example of the Valentine typewriter is on display in MoDiP as part of a celebration of the sixties complementing the exhibition 'Mister Sixties' Philip Townsend's Portrait of a Decade.
Susan Lambert (Head of MoDiP)
For sources and more information see http://www.iconeye.com/, 046 April 2007 and 068 Feb 2009.
Posted by MoDiP at 13:06