As part of the On Collecting art project  Fran Stewart and Bev Miller have responded to the material qualities of Plastic as an art making material, for the production of sound or as a sculptural substance. 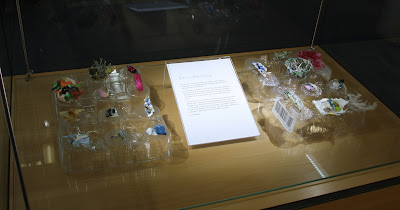 My focus for this body of work was plastic itself, generally viewed as a non-biodegradable substance raising issues of consumerism and recycling.
The Museum of Design in Plastics, houses a vast collection of objects which raise questions about the difference between valuable / precious artefacts and objects normally considered worthless and thus discarded, due to their mass produced status.
In an attempt to recycle this material I have experimented with melting down mass-produced packaging and moulding the substance as sculptural forms. Reconfigured, the plastic takes on the quality of fragments of artefacts or geological sections. There is still evidence of the logos, symbols of the product they endorsed, fragments that are culturally revealing. 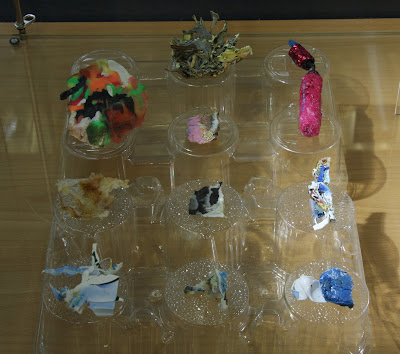 Bev Miller
PLASTIC MUSIC
I set out to make a sound piece using only the sounds that plastic objects make.  I wanted to avoid using existing plastic instruments or trying to create an instrument out of plastic.

I used a Zoom MRS 802 8 track studio and an AKG C100S condensing microphone.  After laying down a percussive track I then added in other sounds.
Plastic used to make sounds included - marker pens, plastic jars, empty bottles, beads, a torch, a ruler, plectrum, Sellotape, a comb, polythene sheeting, bubblewrap, a carrier bag and Velcro.
The outcome is four mixes entitled Polythene, Bubble wrap, Vinyl and Perspex.